Review: Kitty Hawk and the Tragedy of the RMS Titanic @kittyhawkworld 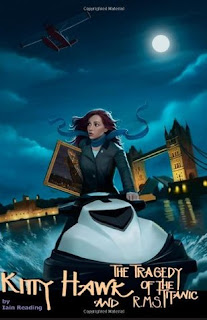 
This fourth book in the series brings Kitty to the emerald hills of Ireland where she meets a handsome stranger and is quickly swept up in a perplexing hundred-year-old family treasure hunt involving secret codes and puzzling clues that lead her on a fast-paced adventure that carries her from Dublin to London - from the decks of the ill-fated ocean liner Titanic to the temples of ancient Egypt and the streets of Jack the Ripper - until she finally unlocks the mystery and discovers the long-hidden treasure. Much like the earlier books in this series, Kitty Hawk and the Tragedy of the RMS Titanic is a perfect book to fire the imaginations of armchair detectives of all ages. Filled with fascinating and highly Google-able locations and history the reader will find themselves immersed in brand new worlds that are brought to life before their very eyes as Kitty Hawk experiences the stories and history of a doomed ocean liner and unravels the Tragedy of the RMS Titanic

Kitty Hawk continues in her flight around the world and this time she arrives in Ireland where she meets a lovely and handsome young man who needs her help to find a treasure lost in the legendary Titanic. A series of discoveries and travels to London, Dublin and other places will unravel secrets, hidden stories, and lots of forgotten facts about the ship and its passengers.

It's been a while since I've read the previous book but once I've started reading it felt like no time had passed by, it was like meeting an old friend after a while. Kitty is a strong, intelligent and human young woman. She is one of those people you want to keep in your life, her sense of adventure and desire to help others takes her in the craziest and most incredible journeys.

It only took me a day to read it, the suspense and intrigue kept me reading for hours. I couldn't stop, I wanted to know more and more. And every new clue brought more action to the story. And there were so many facts I didn't know about the Titanic and what happened after the sinking that every new revelation was a pleasant surprise.

I love the book and jumped right into the next one. Iain created an excellent character and writes the best adventures. Kitty is definitely one of my favorite fictional woman in the world.