Review: Kitty Hawk and the Mystery of the Masterpieces @kittyhawkworld 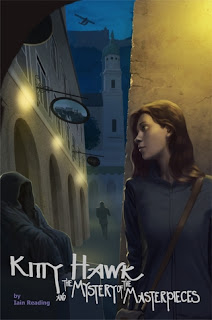 Kitty Hawk and the Mystery of the Masterpieces is the eagerly anticipated fifth instalment of the Kitty Hawk Flying Detective Agency book series. This series features the intrepid teenage seaplane pilot and amateur detective Kitty Hawk as she continues in the footsteps of Nancy Drew and Amelia Earhart on her epic flight around the world.
After meeting up with an old friend in the eternal city of Rome, Kitty Hawk unexpectedly stumbles (almost literally) into a bizarre mystery involving creepy disembodied voices, secret hidden rooms, unbreakable mathematical codes, ominous chain-smoking strangers and an array of plundered artworks by such famous masters as Claude Monet, Camille Pissarro and Vincent van Gogh - all of it wrapped up and entwined in an enigmatic riddle hanging in plain sight right in front of everyone's noses.
With the help of friends both old and new, Kitty Hawk follows a trail of cryptic clues that leads her on a breathless tour across a quintessentially European landscape - from ancient Roman Italy to the darkest corners of Germany, Austria and beyond.
As with the previous books in the series, this new installment is perfect for firing the imaginations of readers of all ages. Filled with fascinating and highly Google-able locations and history, this exhilarating adventure will have armchair explorers and amateur detectives alike anxiously following every twist and turn as they attempt to help Kitty Hawk try and solve the extraordinarily bizarre Mystery of the Masterpieces.

Kitty Hawk is now in Rome and her friend Charlie happens to be there too. As usual, she and her friend will manage to end up caught in an adventure and solving mysteries. They meet two friendly siblings who invite them to their house. A simple invitation will the start point for the new quest. Stolen paintings, Second World War, Spies, and cryptic radio messages will be the mix for this book.

Kitty seems more mature in every new book, I can see her now as a grown-up young woman with a bright future ahead. Charlie is a great partner in this installment and I love that despite they have a great relationship, it was not necessary to add a romantic element to it.

This one is the darkest books in the series, it had more serious moments, especially because of the places she visits, the topics it includes and what's behind the stolen paintings.

Another great book in the series. I love Kitty and would love to read more about her.