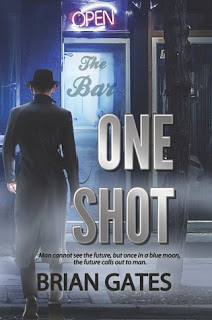 
“Man cannot see the future, but once in a blue moon, the future calls out to man.”
Meet Jack Shot, a bartender with a happy-go-lucky attitude, content to drift through life at his leisure…until one night a strange man pulls up a seat at the bar and flips his life on end.
Now the 23-year-old, whose biggest concern to that point had been asking out a hot blonde coworker, is charged with stopping tragedies before they occur. It starts with a riddle that inexplicably materializes on a single sheet of paper placed on his desk. After deciphering it, Jack is shocked to find they predict impending, man-made catastrophes. The necessary details of these future events are buried in the cryptic riddles, and the lives of many hinge on Jack’s ability to decipher them and stop the devastation before it occurs. Aided by his crush, Abby, and Larry, the old man who runs the bar, Jack takes on the impossible task.
Jack is forced to question his own sanity whilst striving to save as many people as possible, even as the riddles become progressively more lethal and drag him further and further down the rabbit hole.
In a shocking twist, Jack must reckon with the most perilous threat yet, and is forced to confront an evil that hits closer to home than ever before. He must race against time to prevent losing everything, because when the future whispers your name, you only get One Shot.

Brian Gates grew up in a small country town in North East Ohio with a younger brother and sister. He had a passion for writing from a young age, and spent countless hours in and out of class writing stories, and he even gave his senior speech on various writing concepts. His love of stories eventually led him to pursue an English Degree in college. During his time there, several professors were impressed by his writing ability and encouraged him to pursue writing as a career. He graduated from Kent State University in 2014, and continued to pursue his passion for writing. Brian prefers a handful of literary genres, but two of his personal favorites are psychological thrillers and works set in post-apocalyptic worlds. Two of his biggest influences are Dean Koontz and D.J. MacHale.

As soon as you start reading "Jack's memories" you know this one is no ordinary tale. A man who claims to have a particular luck and can see the future is not someone you encounter every day.

It all begins with a mysterious poem he gives by mistake to his coworker, which seems a simple strange riddle. However, when the words in the paper become true Jack and his friend realize that maybe the riddles are some kind of premonition.

This one is an engaging reading, with an excellent writing style and words thought carefully to create a solid story with very interesting twists and action in every chapter.

I enjoyed reading about Jack and his attempts to save people from different tragedies. Little by little we see how it all is connected to reach a mind-blowing end.