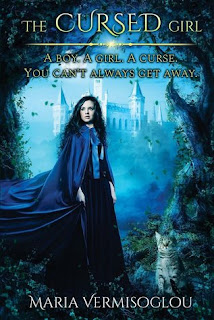 
Sixteen-year-old Eva is a witch who lived in Spain, in the year 1230. She met a boy named Jonathan who would become her whole world. Everything was normal until she was faced with challenges that will change her life forever. As a healer, her job is to help people, but there are forces that will try to prevent that. There is a war coming and Eva and her friends must do everything they can to survive. Can they fight their way against the dark forces that are surrounding them? Her wits and inner strength helped everyone who encircled her to survive but will she be able to survive herself? Supernatural creatures, royal backstabbing and many more await you in this thrilling novel that will take your breath away. 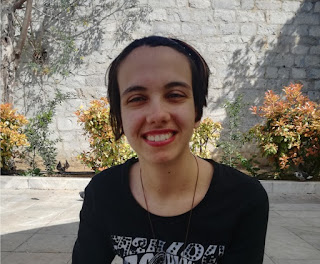 Maria Vermisoglou is a librarian who lives in Greece. She has been a booklover ever since she learned to read.

In order to pass the time, she spins stories in her mind. One such story became reality in the form of “The Cursed Girl” and received great success.

In July 2018, she was nominated as the second place winner in the First Annual Indie Awards as the Favourite New Female Author.

Eva is a teenager witch who lives in Spain during the 13th century. Hiding her true identity she poses as a healer and makes friends with the future king and his cousin. War will arise and she will have to protect those she loves with all her will. People plotting to kill her friends, underground trips and a lot of fighting will be part of the story. Demons will try to harm her and she will have to prove time and time again how strong she is.

I like the main plot, I think it's quite solid and the author did a good job creating a believable world where magic is real. The characters are sweet and act according to the time they live in, you can see how they evolve and mature and how their relationships grow.

My only complaint and the most important one is the length of the book. It's too long and you start to get tired of reading. Despite the good writing and the appealing of the story, you keep turning pages and the end is nowhere near. I get that the author had a lot to tell and the characters have a lot of potentials but it still feels like too much. And when you get to the end... boom! you have to wait for the sequel!!!

Email ThisBlogThis!Share to TwitterShare to FacebookShare to Pinterest
Etiquetas: paranormal, Review, witches, YA