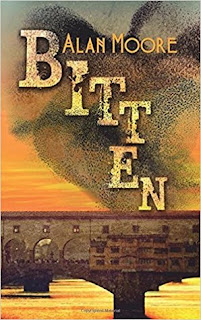 
In the not-too-distant future, Italy is in disarray. It has voted to leave the EU in an attempt to regain control of its laws, finances and commerce. Even so, the country's economy is shrinking and its national debt rising. There is a marked escalation, too, in unemployment, bank loans and immigration. Production and service companies are in difficulty. The only thriving business areas are the black market and organised crime. There is discontent and protest on all sides. In Florence, the local Mafia boss, more accustomed to gunrunning and trading in plutonium, is involved in organising a silent auction for the sale of one of the world's most valuable lost paintings - a sixteenth-century masterpiece, which was appropriated in World War II by Stalin's Trophy Brigade. A British art expert is set to buy the picture on behalf of his client, a South American billionaire - yet surprisingly two Italian undercover intelligence agents, acting as antique dealers, submit the winning bid. All the while, human beings continue to harm the Earth by destroying land, sea, air, animals and trees. Global climate change, polluting the atmosphere, depleting the ozone layer: these are some of man's crimes against Nature. But time is running out. Nature has lost patience with humans. Unless something is done immediately to reverse the destruction of the ecosystem, Nature will retaliate by deploying the terrifying forces at her command. And as a first step in wreaking her revenge, she instigates a reign of terror by the deadliest creature on Earth.

Mosquitoes are a worldwide problem, even here in Uruguay they are a threat in certain seasons. These little devils bring chaos in fear when people start to get sick by their bite. Now, imagine a future Italy where on top of economical problems you start to witness the consequences of global warming and all the damage we have done to Earth. Huge mosquitoes and mayhem start to happen and Claudia is the one that could have all the answers. And.. also add a stolen piece of art of invaluable price, the mafia, black market, betrayal, blackmail, violence, and death...  I mean, we have a varied mix.

I don't know why but somehow the different themes and plots work together to create an intriguing and fascinating story. It seems that the only thing linking the stories is that the characters are all connected or related. But still, the story feels as one despite the fact that we have a story about nature and global warming on one side and a story about the mafia, stolen art and the black market on the other.

I have to mention that some scenes are a bit strong, not only some that involve sex, there is a lot of violence too. Of course, if the mafia is involved you can expect some hard moments.

I enjoyed Alan's writing, is easy to read, interesting and solid. The book is something different and was very enjoyable.