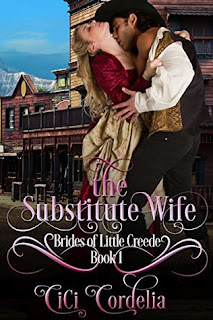 
HARRISON . . .
Once his fortune in silver mining is secured, Harrison Carter finally sends back home for his fiancée. It’s been four years since he’s seen Jenny.
But it’s Retta Pearce, Jenny’s sister, who arrives by stagecoach with young daughter Adeline in tow. When this lovely, soiled dove brings devastating news and a written plea from Jenny to marry and care for Retta and little Addie, what’s a good man to do?
RETTA . . .
Fulfilling her dying sister’s request, Retta travels across dangerous territory to marry a man she barely remembers. But the hard miner who meets her at the stagecoach surely isn’t the same one her sister claimed was kind and honorable, a gentleman who’ll embrace her and her daughter as if they were his own. Has she made a mistake she’ll pay for, the rest of her life?
TWO PEOPLE . . .
Thrown together in shared sorrow, Harrison and Retta struggle to forge a life in the brand-new state of late-nineteenth-century Colorado

CiCi Cordelia is the pen name for the writing team of BFFs Char Chaffin and Cheryl Yeko.
Published authors in their own right, they share a love for well-written stories infused with their favorite romantic genres: paranormal, suspense, and erotica. Both are fans of Alpha Men and the women they’d lay down their lives for.
As a writing team, they bring a solid know-how for accomplishing the foundation of what makes a great romance read: a strong story, a passionate romance, fascinating characters, and a happy-ever-after ending.

Individually they can be found here:

Retta and her daughter will travel to live and begin a life with a man who was waiting for her sister. After four years, marrying her fiancee's sister is not what Harrison was expecting but he will follow her last wish. And so a story about learning to love and protecting your family begins.

The Substitute Wife is an enchanting, easy to read and sweet love story. The tension between the main characters is understandable, neither of them wanted to marry the other but life is not always what we want.

Retta's loves for her daughter is admirable and she is a strong and likable character. Harrison is the typical gentleman, with a sense of honor and respect that makes him totally attractive. Their relationship seems quite natural and given the circumstances it flows and grows into something special. And of course, the little Addie is extremely sweet.

The plot has all the elements of a historical romance, the setting is well portrayed and the bad guys have fun messing with other people's lives.