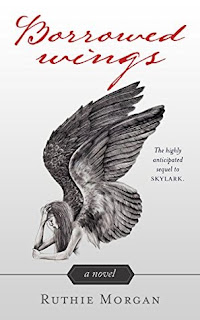 
How do you start again when your world has been torn in two? How do you move on when disaster follows like a shadow? Billie Skylark is trying, and Jack Kelly would like to know.
Following the conclusion of Skylark; Billie must find her way forward and Jack must find his way back.
In a world changed by fate and loss, the community of St. Cloud strives to find solace in love, friendship and new life. As Billie struggles out from the confines of Evan’s shadow, Jack fights to avoid the truth. But the future they try to build is threatened by the arrival of Jack’s brother Raife, whose presence forces open the Pandora’s box of Jack’s past. While Billie faces life alone, Jack must deal with the repercussions of death.
The small community are buffeted by St. Cloud storms, and life mirrors the islands dramatic weather. Dan finds himself helpless; forced to hurt those he loves most, Sadie has a secret that threatens her future with Jed, and Virginia faces a truth that turns her world upside down.

Ruthie Morgan lives and writes by the beach in New Zealand's South Island with her Canadian husband and four children.
Born and raised in Scotland she studied in England, ran off to America, then returned to begin a career in a variety of wide ranging fields: movie theater popcorn seller, runner, bike courier, bar tender, lifeguard, teacher, counsellor and coffee shop owner. Her need to write about everything she encountered eventually worked its way into bank of fabulous detail for a career in fiction.
Her first book; 'Doolallys; the story of a little coffee shop with a big heart' is based on her adventures as a cafe owner in the historic town of Bath, England.
Ruthie's first work of fiction: 'Skylark' is now available on Amazon and continues to receive rave reviews. With the sequel well underway, fans of Ruthie can look forward to another installment in the St. Cloud based saga.

After a heartbreaking ending in Skylark, I had to know what was next for Billie. When your life crumbles and pain is too much sometimes the best option is just to move on. If you thought you had enough in the first book, you were wrong. Borrowed Wings is another emotional, raw and wild ride. Ruthie writes the most amazing books (at least these two touched my soul in an amazing way).

In this installment, we have more about the other characters. For example, we have more about Jack, the character we learned to love in the previous book and is now a central player. We discover so much about his past and his family to finally understand why he is who he is.

This one is a really good written book and it's almost impossible to put it down. The story drags you down and buries you in a consuming world where your emotions are torn apart.

I absolutely loved this book and I'm happy I've read it.