Review: And Then I Am Gone: A Walk with Thoreau 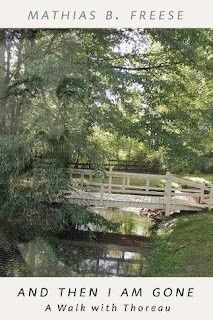 
And Then I Am Gone: A Walk with Thoreau tells the story of a New York City man who becomes an Alabama man. Despite his radical migration to simpler living and a late-life marriage to a saint of sorts, his persistent pet anxieties and unanswerable questions follow him. Mathias Freese wants his retreat from the societal "it" to be a brave safari for the self rather than cowardly avoidance, so who better to guide him but Henry David Thoreau, the self-aware philosopher who retreated to Walden Pond "to live deliberately" and cease "the hurry and waste of life"? In this memoir, Freese wishes to share how and why he came to Harvest, Alabama (both literally and figuratively), to impart his existential impressions and concerns, and to leave his mark before he is gone.

Mathias B. Freese is a writer, teacher, and psychotherapist who has authored six books. His I Truly Lament: Working Through the Holocaust won the Beverly Hills Book Awards and the Reader's Favorite Book Award, and it was a finalist in the Indie Excellence Book Awards, the Paris Book Festival, and the Amsterdam Book Festival. In 2016 Tesserae: A Memoir of Two Summers, his first memoir, received seven awards.

'And Then I Am Gone'... a non-fiction that it could be the voice of any fictional character but is the real voice of author Mathias B. Freese. A man who moves from New York to Alabama and brings Thoreau to takes us on a journey through his life, his thoughts, errors, and successes. A life that like many other is full of richness and wisdom, a life that is far from perfect but it's real.

I'm not very familiar with Thoreau but still, I enjoyed the book because he is not the protagonist of this story, he only comes to help Mathias with his goal. Write a book with a powerful message before the end comes.

I enjoyed the writing and the passing. I loved the part where he asks himself: Why does he write? His intensive analysis is comparable to any other activity in our lives, it's a profound reflexion on why do we do the things we do? What are we ultimate looking for, what are our motivations? In essence, what is that we want from life? what's the meaning of our lives?