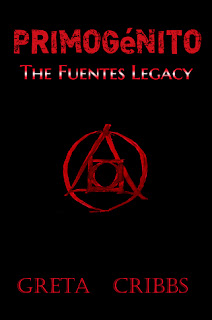 
“I wake up in the middle of the night sometimes and see him standing at the foot of the bed, staring at me. Some nights I don’t think he sleeps at all.”
Ashley Preston has a problem. Her husband Nick has fallen victim to a mysterious illness, alternating between bizarre physical symptoms for which doctors cannot determine a cause and alarming personality changes which have Ashley fearing not just for Nick’s health but for her own safety as well. Desperate to save her husband, she turns to the only person she believes can help her: Damian Fuentes.
Ashley knows Damian’s family has dabbled in some kind of dark magic over the years. She also knows that when Nick was ten years old, Damian’s grandfather performed a strange ritual on him. Convinced that this ritual is at the root of her husband’s problem, Ashley begs Damian to delve into the Fuentes family’s darkest secrets in search of a cure. But Damian has spent the past five years trying to distance himself from his family and his traumatic past. Helping Ashley will mean resurrecting the long-dead ghosts of his most disturbing memories. If he saves Nick he may very well lose himself.

When Ashley appears on her doorstep, Jenn knows the past has come to hunt her again. Ashley needs Damian's help to save her husband Nick. The four of them share a tragic past and apparently, the consequences of it keep messing with their lives.

This one is a magnificent story that traps you and doesn't let you go until the end. You keep waiting to discover more about the Fuentes family and the magic they supposedly have. The characters move on with the story and nobody stops to tells us what happened all those years ago, we have to complete the puzzle as they go and with the information that little by little they provide.

All the characters are amazing, each one has a defined personality and we want to save them all. I loved the author's writing and how she described scenes and dialogues. I really got lost in the reading.

There is no low point in the story and it there are scenes with a just degree of tension and violence necessary to create a good atmosphere. The Fuentes Legacy is such a rich and solid story, each detail is taking care of and you want more and more.

I absolutely loved this book, I wasn't expecting such suspense and action and it was refreshing to read a different kind of book that hooked me up from the beginning.