Review: Hatshepsut: The Pharaoh-Queen of Egypt 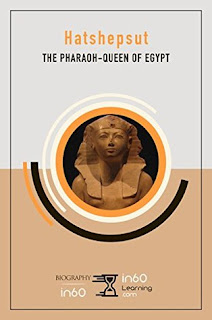 
When Pharaoh Thutmose II died, he left an heir far too young to rule Egypt. His widow Hatshepsut stepped up to take his place. For at least the next 20 years, Hatshepsut ruled as Pharaoh King of Egypt in an era of prosperous growth and peace. When she died, her nephew Thutmose III attempted to smear her good name and wipe her memory from history. However, despite his efforts, his aunt Hatshepsut holds the title of most famous native Egyptian woman to ever rule as pharaoh; she also retains a legacy as one of the most successful female leaders in early history.

Smarter in sixty minutes.
Get smarter in just 60 minutes with in60Learning . Concise and elegantly written non-fiction books and audiobooks help you learn the core subject matter in 20% of the time that it takes to read a typical book. Life is short, so explore a multitude of fascinating historical, biographical, scientific, political, and financial topics in only an hour each.

I love to read and I love to learn new things but sometimes our dynamic and fast world doesn't let me sit and read for long so when I was presented with the idea of reading a book in less than 60 minutes, of course, I had to say Yes. In60Learning has a catalog of historical and biographical books that can be read in 60 minutes, yes ONE HOUR. And it's true!!!

Originally, I wanted to read another book but I read "Hatshepsut: The Pharaoh-Queen of Egypt" and I fully enjoyed it. I knew nothing about Hatshepsut and the book presented enough knowledge to get to know a woman with a big role in the Egyptian History.

The writing is easy to understand. Sometimes biographical books feel heavy or are full of facts we really don't care. Here the idea is to be able to read it in a short time and learn something, and the objective is achieved with short chapters that gattered the necessary information to understand the subject with simple language.

If you like non-fiction and learning this is a good choice, especially if you don't have much free time.