Review: The Hour of the Innocents 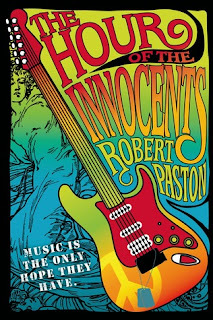 
1968. Vietnam. Social turmoil. Drugs. Music.
Four young musicians are determined to escape a ravaged industrial landscape by playing rock and roll...and they play it with a passion and brilliance that contrasts with their poverty. Music is the only hope they have.
Set against a fleeting age when music seemed about to change the world, Robert Paston's The Hour of the Innocents tells the story of the band known as The Innocents and captures the true drama of the late 1960s—not the glitter of famous names, but the yearning of the heartland guitarists and drummers who believed…and the lovers, friends, and lives crushed along the way.

The Hour of the Innocents is the story of Will and the band The Innocents and their desire to make it in a moment where music was having a major role in history. It's a story about many things, you have friendship, growing up, family, post-war life and so much more.

I liked the portrayal of the era, you can feel the sixties in the air and the author created a story that really reflects the moment. I also liked the songs, I wanted to listen to them and really hear how they sound.

I didn't like the book as much as I would have liked. There was something in the story that lost me for moments. I mean the characters are good and you can feel the author admiration for this musical era but for me, it felt too documentary for moments and I lost the pace I like in fiction books.