Review: Before I Let Go @mariekeyn 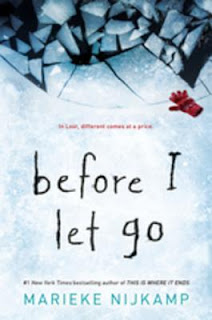 
Best friends Corey and Kyra were inseparable in their snow-covered town of Lost Creek, Alaska. When Corey moves away, she makes Kyra promise to stay strong during the long, dark winter, and wait for her return.
Just days before Corey is to return home to visit, Kyra dies. Corey is devastated-and confused. The entire Lost community speaks in hushed tones about the town's lost daughter, saying her death was meant to be. And they push Corey away like she's a stranger.
Corey knows something is wrong. With every hour, her suspicion grows. Lost is keeping secrets-chilling secrets. But piecing together the truth about what happened to her best friend may prove as difficult as lighting the sky in an Alaskan winter... 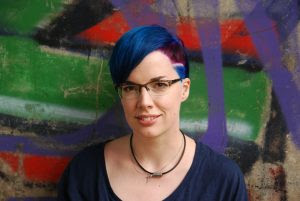 Marieke Nijkamp was born and raised in the Netherlands. A lifelong student of stories, language, and ideas, she spends as much time in fictional worlds as she does the real world. She loves to travel, roll dice, and daydream. Her #1 New York Times bestselling debut novel, This Is Where It Ends, follows four teens during the fifty-four minutes of a school shooting. Her sophomore novel, Before I Let Go, is a haunting young adult murder mystery set during a cruel Alaskan winter.

Marieke is the founder of DiversifYA and was a founding sr. VP of We Need Diverse Books.

I really don't know how I feel about this book. I was contacted by the publisher to read it and I said yes immediately, I loved the cover and the blurb sounded interesting. And now... after finish it I'm torn in two. One part of me really enjoyed the mystery and the intrigue and wanted to keep on reading chapter after chapter. But, the other part of me didn't enjoy a few elements of the book and it's disappointed by the end.

It's easy to summarize the story in one line: Corey comes back to Lost Creek after her best friend dies. Through her and her memories, we discover that Kyra was a bipolar teenager and that the town rejected her and that Lost is not a normal place. Once she is back she knows something is not right and that something happened to her friend. With her mind set on finding out the truth, Corey has to face a whole town that doesn't accept her anymore and that will protect its secrets at all cost. And, it's about this last part where I don't fully enjoy the story. Despite being fiction and labeled as mystery, thriller or suspense (take your pick) I found hard to believe some of the things happening in the story. It was too much... come on why did she went alone, I know it used to be her home but her best friend just died she needs some kind of support and she still is a kid for me. I don't want to spoil anything so I won't say anything else.

I will highlight some of the things I liked, for example, that the author decided to include topics as mental health and sexuality. Kyra and her mental illness are well portrayed and sounded believable. The relationship between the two girls was solid and it was crucial to the story.

I didn't understand the part of the book that looked like "script" segments, I would have like in a movie adaptation but here they appear at a weird place in the book and don't make much sense to me. If they would appear in the first chapters maybe I would have gotten used to them but it was not the case.

Overall, I enjoyed the book, the mystery kept me reading and as well as Corey I wanted to find out what happened the only thing bad was those minor issues.

Email ThisBlogThis!Share to TwitterShare to FacebookShare to Pinterest
Etiquetas: mystery, netgalley, Review, YA