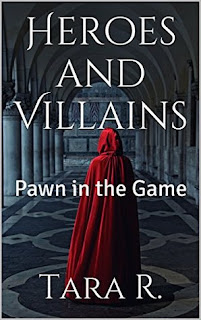 
Aurora Grimaldi’s life has been about fighting for justice under the ruthless regime of Shadow kingdoms. In a twist of fate, she uncovers a secret organization run by creatures of magic- the Imperium. The Imperium is in a crisis. Something has been stolen from them and they will stop at nothing to get it back. The more Aurora gets involved, the deeper she is pulled into a web of lies and deceit. And it doesn’t help when the Shadow kingdoms start interfering. With the thief lurking in the shadows, Aurora struggles to find her place in everything that is going on and her choices may just have far more dangerous consequences than she could have imagined.

Tara lives in the lovely city of Toronto. An engineer during the day, she moonlights as a writer. Her favourite genres are romance, mystery and fantasy. She has been writing since she was 7 and her first story was about a spaceship (BIG Star Trek fan here). When not working or writing, she catches up on her favourite shows on Netflix and spends time with family and friends.
| FACEBOOK  | GOODREADS | AMAZON

Heroes and Villains is a fantasy story with a beautiful cover. It's about this girl Aurora (who ALWAYSSSS wears her red coat) and the Shadow kingdoms and a secret organization.

One of the things, why I didn't love the book, was that for moments I felt like there was too much going on. I didn't like the constant time jumps, I get that it was useful to see what had happened in the past and how it was related to the present but still it was a bit distracting.

The book has a lot of suspense and action and people trying to kill other people. The fantasy element is quite strong a there is a lot of magic.

I cannot say either that I loved it or hated it, it just wasn't my cup of tea. I enjoyed pieces of it and I think that if you like fantasy you can try it.