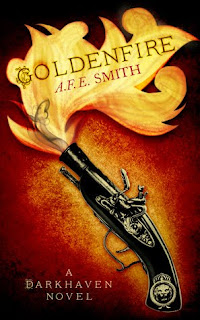 
In Darkhaven, peace doesn’t last long.
Ayla Nightshade has ruled Darkhaven for three years. With the help of Tomas Caraway, her Captain of the Helm, she has overcome her father's legacy to find new confidence in herself and her unusual shapeshifting abilities.
Yet three years ago, a discovery was made that could have profound consequences for the Nightshade line: a weapon exists that can harm even the powerful creatures they turn into. And now, that knowledge has fallen into the wrong hands.
An assassin is coming for Ayla, and will stop at nothing to see her dead.

I'm a full-time editor, a part-time daydreamer and a constant scribbler. I have a three-year-old son (known to the internet as Small) and a baby girl (known, perhaps predictably, as Tiny). Things I like include snacks, books, complex maths problems, snacks, animated films and snacks. Send me chocolate and I'll be your forever friend. I also happen to be a robin some of the time, but you shouldn't let that bother you.

My debut novel, DARKHAVEN, is out now from Harper Voyager. It's a fast-paced fantasy whodunnit featuring love, murder and obsession, carriage chases, duels to the death and a very angry Wyvern, set in a unique city in the throes of industrial revolution. Coming soon to an ebook reader near you :-)

In this sequel, we get to see how Ayla has grown to be a mature ruler for Darkhaven but know she has to deal with a new threat and with a new weapon that can kill her kind.

AS the first book this one is a dark fantasy with sub-plots and characters well developed. We get to see much of the training the guards have to endure especially because we have a strong and decide young woman who becomes a key player in the story.

There is suspense and intrigue through the all story as we read the letters sent by the "bad guy" and as we tried to figure who is the one threatening Ayla. I think the Incognito is maintained throughout the chapters and the reader keeps hooked to the book at all times.

One of the things I liked about the first book and this one is the writing, the language is excellent. The descriptions are wonderful and the words flow naturally.

Overall, I will read the third book to see how the story unravels. Another great book in the series.

Email ThisBlogThis!Share to TwitterShare to FacebookShare to Pinterest
Etiquetas: paranormal, Review, YA