Review: A Different Kind of Lovely: A Novel 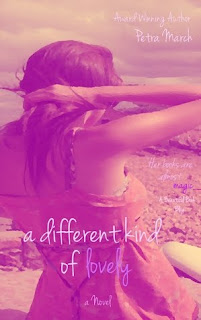 TITLE:  A Different Kind of Lovely: A Novel

“A man with a damaged soul fell in love with a ballerina with a broken body.”

When Neal Medwin glimpses Mina Automne for the first time, he's a man whose soul is darkened with memories of a painful past, whereas Mina is a vibrant, strong, young woman. She's a determined ballerina who's carefully planning and painting her life.
Neal steps into her existence and threatens to shatter Mina's plans with an impossible request.
Mina can't help the fragile man who's invading her home, even though their parents used to be close friends and she knows of Neal's hurtful background. She allows him to linger within her lovely and artistic world, however, hoping he might find some peace and solace.
Slowly, their conflict turns into friendship, and eventually into love, until a terrible discovery ruins Mina's projects and forces her to let go of all her dreams, and of her sweet, damaged man.
Neal is unable to fight for Mina and for the unripe love they share, because he's not ready to leave his past behind. He's not strong enough – not yet.
(Ages 18+)

Petra March is the Award Winning Author of the A Touch of Cinnamon Series and of the stand-alone novel, A Different Kind of Lovely.


Her book, All the Skies I will not See, is a Library Journal SELF-e Selection. The book won the 2016 Pacific Book Awards for Best Short Story, and was a Gold Medal Winner (Fiction - Short Story) in the 2016 Readers' Favorite International Book Awards. In 2015, the book was a Finalist in the 2015 Wishing Shelf Independent Book Awards, won the Pinnacle Book Achievement Award for Best Novella, earned the Literary Classics Seal of Approval, and received a 5-Star Review Seal from Readers' Favorite. The literary magazine Shelf Unbound listed All the Skies I will not See amid the 2015 Top 100 Notable Books.
The multi-award winning All the Skies I will not See features characters from Petra March's other works: A Veil of Glass and Rain(Special Edition), A Dream of Lilies:A Novella, and A Different Kind of Lovely:A Novel.
A Veil of Glass and Rain(Special Edition) was a Finalist in the 2016 I Heart Indie Contest (New Adult), organized by the Las Vegas Romance Writers of America, and was featured in the June 2015 issue of the literary publication InD'tale Magazine.
Petra March graduated summa cum laude in Theater and Cinema Studies at the University of Rome 3, and earned a MA degree from the Catholic University of Milan. She studied Screenwriting and History of American Cinema at UCLA and NYU, and worked as screenwriter in Italy and France, where she also taught Creative Writing in elementary schools and junior high schools.
Presently, she keeps traveling and dreaming through her novels and stories; just like Petra, her characters are deeply in love with Europe and the USA.

Neal is a broken man, after losing his brother nothing has been the same. He arrives at Mina´s home only to meet a sweet, fragile and loving young woman who has her eyes set on dancing. Both of their worlds collide and plans are shattered to create new ones. Mina tries to heal him and wants to be loved. Neal doesn´t want to ruin her but love comes in between and there´s nothing these two can do. However, his family and some cruel revelations will do their best to separate them.

This is a story about love, life and grabbing our destiny with our hands and do what comes best. I have totally forgotten how deeply emotional and draining Petra´s books are. I loved the anguish, the despair and the love itself. I felt all the feelings running through me as I was reading and I ended up emotionally drained. I don´t regret it because it only means the author did an excellent job creating characters and a story that comes to life as you read it, that feels like more than just words on paper (or a reader).

I absolutely loved this book. And just so you know the warning of +18 in the blurb is only because the book has some sex scenes that could be too graphic for young readers.


View all my reviews