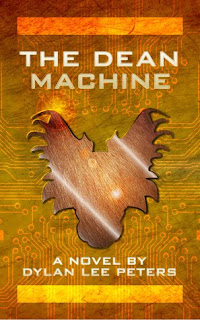 Meet Dan Delacor, an utterly boring citizen of Yellow City. Every day he puts on his yellow shoes, yellow shirt, yellow pants, and yellow tie, and catches a ride on the Tunnel Runner from the suburbs into downtown. He has a job, a home, and a girlfriend, and he never wonders what waits beyond the giant glass wall that surrounds Yellow City.Except… Dan isn’t as boring as he seems. He often wonders why everything in Yellow City has to be yellow. He wonders why he suffers frequent anxiety attacks, and why he can’t help himself from strolling through dangerous neighborhoods, or running wildly through the fields that separate downtown from the suburbs. Mostly though, Dan wonders why he can’t remember how he lost his right arm, or anything that happened before five years ago.So, when Dan’s mundane yellow world is interrupted with the seemingly impossible presence of a little red dog named Dean, he quickly finds out there are answers to his questions, and that everything he knows is a lie.Follow Dan as he learns the secrets of his true identity, the scope of the world beyond the wall, and the true intentions of Yellow City’s mysterious leader, Chancellor Elgrey Vinsidian. Meet Wendy, the twelve-year-old girl on a rescue mission, Echo Valkzdokker, the woman with a love for danger, James Perkins, the wily pilot who has a way with words, and Bianna Kensington, the cold-mannered rebel with a cause. Look through the cracks of this new world with Dan as he learns why his little friend is nicknamed The Dean Machine, what special bond they share, and why the dog deserves a legacy that should live on forever.
He lives to love.He would die to protect.His heart is a machine.

Inspired by his dog, Dylan Lee Peters wrote a wonderful sci-fi story where love and protecting your loved ones beat all the evil in the world. I have to say that the preface had me in tears I couldn´t stop, but please don´t let this discourage you. The author only explains why he wrote this book and we get to know a wonderful and loving dog. Then, when we get to the story is all sci-fi and fantasy so don´t worry, no more tears.

We met a man living in a monotone and yellow city (yes like the color) who feels a bit out of place. When a strange girl and dog sort of kidnap him and tell him the truth about his world we jump into a story of action, danger, and many breathtaking moments.

We discover a cruel world and the people who want to save it. however, chapter after chapter we encounter more and more surprises. The plot is well thought because revelation after revelation you have to rebuild the world you know so the new makes sense.

The book has lots of elements of fantasy and sci-fi, all well exploited and enriching the story.

I´m so glad I´ve read this book not only as a dog lover but also because it touches our humanity, it makes us think about how we treat each other.