Review: The Watchers of the Night Sky @RachelPudsey 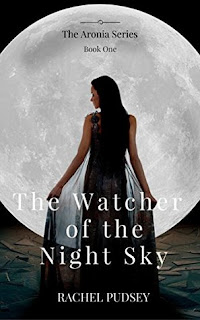 
On the eve of her sixteenth birthday, Abigail Crumble makes the biggest mistake of her life. She wishes on the stars for love.
Abigail soon finds her simple life in chaos as princes, men, and mysterious creatures appear at her door, each adamantly in love with her and refusing to leave her side.
Mixing fantasy, humour and romance, The Watcher of the Night Sky begins the tale of one girl’s journey to rid herself of a curse that was definitely more than she wished for.

Rachel has been writing stories since as long as she can remember. An obsession with Point Horror books led to her first novel being written at the age of ten. Truth be told, it wasn't very good.
The following years were spent writing, dreaming, reading thrillers, romantic comedies, fantasies, occasionally playing guitar, and dabbling in song writing.
Rachel was born and raised in Scotland. A graduate of psychology, she now resides in South Korea. She has dabbled in teaching children, but after a few blessed years has succumbed to teaching business English to adults in Seoul.

Sometimes you get more than you wished for. This is what happened to Abigail, tired of the boys mistreating her she wishes love upon the stars but she gets more than she was waiting for. What begins as a simple wish unveils family secrets, magical creatures, and dark curses.

Abigail is a sweet character, she sounds like an innocent teenager but with a strong personality. The rest of the characters are all great, some funnier than others. I like the mystery behind one of them, despite some of it was a bit predictable.

The whole book has an aura of innocence, it's simple and easy to read and the story is easy to understand. If you are looking for something light to read you should read this one.

I do have to say I was really angry at the end, I know it is supposed to be a series but please that was a huge cliffhanger, I was screaming at my e-reader.

Email ThisBlogThis!Share to TwitterShare to FacebookShare to Pinterest
Etiquetas: Review, romance, YA