Review: The Orb of Wrath @NicWeissman 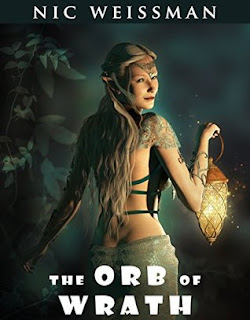 The Orb of Wrath combines fantasy, intrigue and adventure, while transports the reader into a world where almost nothing is what it seems. Plots, counterplots, mysteries, blossoming relationships, disappointments, betrayals, dangers and successes, are combined in this fun cocktail. Erion is a skilled looter who runs the kingdom of Bor with his "brother" Mithir, performing dangerous commissions for wealthy clients. Mithir helps with his long trained magical abilities. One day, when they are doing one of their assignments, they encounter another group of adventurers, with whom they are forced to cooperate. The plot runs in the World of Oris which consists of 12 kingdoms and includes elves clans, dangerous monsters, dwarf kings, rich desert emirs, strange beasts, hospital halflings, ferocious orcs, ingenious gnomes, powerful wizards, brave knights, merchants, terrible vampires, etc. Recommended for the permanent library of all fantasy readers.
Do you dare to accompany Erion and his friends in their adventures?

Nic Weissman is an Amazon Best-Seller and a fast growing name in Fantasy fiction landscape. Nic is the creator of the saga The Merchant's Destiny and The World of Oris. Nic was born in 1974 in mystical place where the sea ends.
His first novel The Orb of Wrath and its sequel The White Lady are now available through multiple channels both in ebook and paperback, both in English and Spanish. The books have been already acclaimed by multiple authors and bloggers like Jordan Elizabeth, Peg Glover in Write-Escape and Tome Tender.
Over the past 16 years, Nic has lived in 14 different addresses across 3 different continents. He has traveled to 30 countries and speaks 4 languages. As you can imagine, Nic loves travelling.
You can follow Nic through his web nicweissman.com or Social Media channels like Facebook, Twitter, Google+, Slideshare.net and Linkedin among others.

The Orb of Wrath is a fun adventure book with lots of action, lots of emotions and surprises in every chapter. The writing style is really good and the characters are quite good.

The passing is quite steady and despite I have a hard time getting into the story once I get to the middle of it I couldn't put it down.

I liked that the author included many mythical creatures, we get to read about vampires, monsters and more. Each one comes to add more magic to the story.

Overall, is a good fantasy and if you like the genre you should add it to your TBR list.