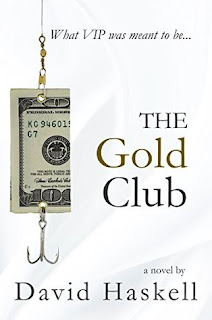 Business is booming at mega content provider Sahara Corporation, but none moreso than in the elusive, exclusive Sahara Gold Club. Clients pay dearly for gold club privileges, but the benefits are equally extraordinary. Using the full power of Sahara Corporation’s vast infrastructure, the club is used to boost online rankings, launching clients’ digital creations out of obscurity and into the spotlight. As the list of clients grows and the club expands, Sahara clock-puncher and club creator Ted Ward and his friends line their pockets. Unfortunately for Sahara management, the gold club isn't actually under their control. This company within a company is wholly concocted by Ted and his team of conspirators. Having taken matters into their own hands, they’re stealing clients and cash right out from under the noses of their employer. The rogue band of employees hack into the system, forging strong relationships with the clientele for beneficial exchange. But when Ted starts dating an up-and-coming singer/songwriter named Til Nune, he invites her into the club and promotes her interests above the rest. In a strange twist, the people in charge of the company find themselves benefiting from the new venture as well. The chase is on to catch the hackers and take them out without killing the golden goose.
The danger mounts as Security Chief Henry Fangue vows to bring them to justice at any cost. Treachery and sabotage turns friends into enemies, and the perils of public exposure, financial ruin, prison terms, and even more dire consequences threaten to send the whole enterprise crashing down.

Too Much Information is David Haskell's debut novel, published in July 2013. His second book, The Gold Club, is on sale now.
David lives near Tokyo, Japan with his wife and their eleven year old daughter. In addition to his two full-length novels, he has also published a number of short stories for the Japanese market.

Born and raised in New England, David is also a professional musician, and has performed with a number of well known groups including the Blue Devils of Concord, California, Kitchen Beat and the Jammitors at Tokyo DisneySea, and the Tokyo Disneyland Band.

The Golden Club is a good book to read if you want something different. There is a lot of intrigue, plotting and a game of who can benefit the most.

The book is well written, the dialogues are ok, they sound real and come naturally. The book has a changing POV so we can see the whole picture and see who is planning what.

The plot is solid and the story flows with a steady rhythm.

Email ThisBlogThis!Share to TwitterShare to FacebookShare to Pinterest
Etiquetas: Review