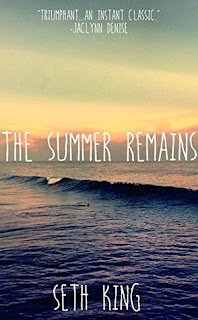 Twenty-four-year-old Summer Johnson knows two things. The first is that due to a quickly worsening medical condition, she faces a risky surgery in three months’ time that may or may not end in her death. The second is that she would like to fall in love before then.
As spring sinks into her namesake season on the Florida coastline, Summer plays the odds and downloads a new dating app - and after one intriguing message from a beautiful surfer named Cooper Nichols, it becomes clear that the story of what may be her last few months under the sun is about to be completely revised. All she has to do now is write something worth reading.
Tender, honest, devastating and triumphant, The Summer Remains explores a very human battle being waged in a very digital age: the search for a love that will outlast this temporary borrowing of bones. In an era when many feel compelled to share and re-share anything about everything, prepare to feel a love so special, you will want to hug it close and make it yours forever.

The Summer Remains is an emotional story about a twenty-four-year-old young woman who has to face a risky surgery that could end in her death. Her only wish is to fall in love in what could be her last summer alive. Using an app she contacts with a sweet young man that will change her life forever.

I had a hard time deciding whether I liked or not this book. I have to be totally honest and clarify this, I have a love-hate relationship with this book. I don't know if hate is the proper word but that's not the point. For more than half of the book, I couldn't understand why all the hype and fuss around the book. Don't get me wrong, I think it's a really beautiful book with a strong message but I had a hard time connecting with Summer and yes I'm talking about a girl who had to deal with some heavy baggage and whose life I don't envy at all. Somehow, I couldn't really love her like I would have liked, I liked her optimism and bright view of life but there was something about her that still couldn't relate to.

Now let's go to the other half of the book and also let's talk about Cooper. OMG! I would have loved to read all the book from his point of view. I enjoyed his voice more than Summer's and his personality was amazing.

The story as a whole is good and the author has a gift with words. He has a really good writing style, and I think that because he is a twentyish person he could create believable characters with real problems and real lives.

I don't mind to admit that I cried a bit while reading this book because like I said it's a love-hate thing, there were moments where reading was slow but other were touching and emotional.