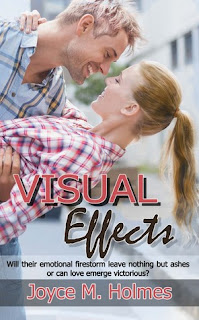 Drey Winston is a fierce competitor who enjoys challenging her mind and body. But when it comes to her heart—no one ever gets close enough to compete for it. Having grown up believing she was an unwanted burden to her parents, she prefers to keep her feelings well hidden. Just when her hard-fought goals are finally within reach, the audacious Jesse Devlin comes along to breach her carefully guarded defenses.
After a disastrous marriage early in life, Jesse Devlin prefers strings-free relationships. Confident and outgoing, he gets along well with women, but his natural charm can’t seem to penetrate Drey Winston’s aloofness. While attempting to win her over, he’s the one who ends up losing his heart.
Can this commitment-phobic bachelor convince the stubbornly independent woman he loves that his feelings—and hers—are the real deal?

Joyce Holmes lives with her husband and very small dog in the beautiful Okanagan region of British Columbia. The award-winning author is happily living her dream of being a stay-at-home writer. Photography and blogging about her travels are two of her passions, along with visiting her kids and grandkids. When she's not dreaming up stories in her head or planning her next great adventure, she’s off enjoying the great outdoors.

'Visual Effects' is the story of Drey, a young woman escaping her past life in New York and trying to start over in LA. After getting a position doing what she loves most, she is ready to make a living in the new city. The only bad thing about her new job is Jesse Devlin, a handsome but cocky man who she met briefly in the past.

At first, Drey and Jesse don't get along. There is a sexual tension present but instead of flirting or denying it, they have fun making the other mad and angry all the time. After many goings and comings, they decide to be friends and getting to know each other is part of the adventure.

This is a story about open up to love and in general is good. The writing is good and the book has a fast rhythm but somehow I didn't love it. There weren't many remarkable moments, there was some drama at the end that gave the book a bit of "action" and when her ex-boyfriend appeared I thought: "DRAMA", but no, he was gone as fast as he came.

Drey is not one of my favorite characters, I usually love my female heroines but she was the exception. Not only she pushed all my buttons with her attitude but also she was awful with Jesse. She is always assuming what people is thinking and unless she is a clairvoyant I don't understand why she is always guessing or rather foretelling what's going to happen. If it had been once, I could have let it go but she does it on a regular basis. For a moment I though she would accuse Jesse of sexual harassment, it could have been an option because he is too pushy but no... she is ok with it and gives him mixed signals. Sorry, but she was annoying and I was expecting more justification for her behavior, I do get that she didn't felt loved by her mom and dad as a child but for what be read she was adored by her grandparents. Now... I really liked Jesse, not only he is described as a sexy, handsome and talented man but he deserves an award for tolerating Drey and loving her despite all.

Overall, 'Visual Effects' is a good romance but not one of my favorites.