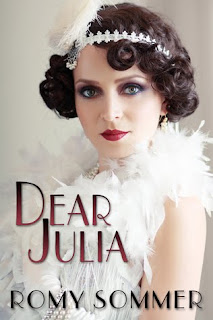 
Rosalie Stanton is a city girl who loves parties and ‘fixing’ people. When she finds a long-lost love letter in a house she’s redecorating she sets off on a quest to find its rightful owner.
Commander William Cavendish has lived as a recluse since his return from the Great War. His peaceful existence is shattered by the return of the letter that once held all his hopes — and by its bearer, the irrepressible Rosalie, who bears an uncanny resemblance to his lost love.
Rosalie is just as determined to fix William and re-introduce him into society as he is determined to resist her. They both might have met their match.

By day I dress in cargo pants and boots for my not-so-glamorous job of making movies. But at night I come home to my two little Princesses, and we dress up in tiaras and pink tulle...and I get to write Happy Ever Afters. What could be more perfect?

I believe every girl is a princess, and every princess deserves a happy ending.

I ABSOLUTELY LOVED THIS BOOK.

'Dear Julia' is everything we love in a historical romance. There is romance, a reclusive man and the girl who shakes his world and parties where.

We have Julia, a smart, outgoing, brave and sweet woman who doesn't follow the rules of her time. And then we have William Cavendish. The perfect, quiet, mystery, handsome and secretive man. He has a secret personality hidden under a hard shell.

After finding a lost letter while redecorating her new home, Julia sets her mind on finding the owner of said letter. Her questioning leads her to Commander Cavendish, a man who has lived away from the world after the war. Their relationship will begin as soon as she appears in his front door with the intention of bringing him back to the world.

Julia is really adorable and lovable, she is the perfect heroine who will crush William's walls. He will try to resist her despite she looks like his lost love. Their relationship is entertaining, with some tension but fast and sweet.

Set in the 1920s, the story takes place in a small town. The author adds historical elements to create a solid background. The writing style is great and the passing is fast, it only took me a couple hours to read it because I couldn't stop.

The story is quite short but it still gives us a solid and enjoyable story. And I can assure you that YOU WILL LOVE THE ENDING.