Review: The Light Side of the Moon @E_Guizzetti 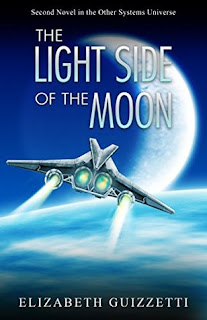 Due to overpopulation, lack of natural resources, no public education, and a surplus of political bickering, Earth is a cesspool and our solar system’s colonies have failed. Nevertheless, outside our solar system, exploration has thrived.
Encouraged by the conquest of Kipos, idealistic dreamers look beyond Earth to build a utopia from the abandoned Lunar Colony Serenitatis. Industrialists reconstruct the colony, but struggle to turn a profit while encouraging scientific discovery.
Brimming with hope despite intense uncertainty and physical hardship, the impoverished Ella Sethdottier follows rumors of plentiful jobs on the moon. On roads fraught with danger, she discovers Earth is a bigger place than she ever imagined, but Serenitatis is little more than a prison colony. Ella forges unlikely friendships with corrupted androids and the quixotic prison doctor, Ian Whitlatch, who champions equality and rights for inmates. Amid corruption and nobility, tragedy and victory, the fate of the colony hangs precariously in the balance. 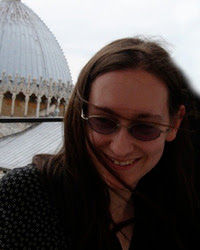 Elizabeth Guizzetti currently lives in Seattle, WA with her husband and two dogs. When not writing, she loves hiking and birdwatching.
WEBSITE  FACEBOOK   TWITTER   GOODREADS  AMAZON

'The Light Side of The Moon' is a much-awaited sequel for 'Other Systems', however, this is a different story with different characters in a different scenario but it still a really good sci-fi story.

Here we meet Ella, who at the beginning is a sweet and innocent little girl who dreams of going to the Moon. A series of events make her run away from an unwanted marriage. She has to endure lots of danger, cruelty and more on her journey to the Lunar Colony. She meets a group of androids who will be her companions and protectors. On another place, we have Ian, a doctor who has dreams of building an utopic place. Once their stories connect we have an exciting and fast story.

Chapters have a fast rhythm and the writing is excellent. We read multiple sides of the story from different characters and they all intertwine at one point or another.

I love how the author creates a book that tells us life stories, this is not a story about a single moment or a short period of time. In this book, characters grow up and evolve. We see them change, make mistakes, we see all kinds of human emotions and they create a colorful tapestry of humanity, even in a place far away from Earth.

Elizabeth does an excellent job creating a solid universe, taking care of every detail to create a believable lunar living space. She uses all the sci-fi elements and we can see she knows what she is doing. Her book is magical, futuristic but at the same time real.

I do have to mention the length of the book. It might seem a bit long but I think is necessary and it doesn't get boring. The book needs space to capture the rich story.