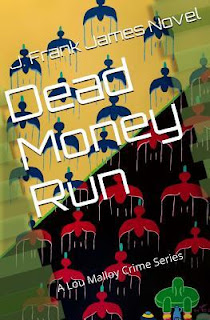 Lou Malloy learns of his sister's death right before he is released from prison, having served 15 years for the theft of $15 million from an Indian casino. He wants two things: to keep the $15 million, which no one has been able to find, and to track down and punish whoever killed his sister.    Lou Malloy teams up with Hilary Kelly, a private investigator. In no time, Lou has found the hidden $15 million, recovered guns and ammunition hidden with the money, and murdered two low-level mobsters and fed them to the crocodiles.
As the body count rises, the story grows more complex and his sister's death becomes more mysterious.

J. Frank James is the author of crime thriller novels. His crime fiction books are gripping and suspenseful with readers being unable to put them down once they get into them. Jim has a passion for writing, and he certainly has the knowledge and experience to write realistic crime thriller novels, thanks to his extensive background in law. Jim attended law school, where he was a member of the law review. He even went on to pass the state bar and started his own law practice that specialized in complex litigation.

Jim’s experience in law helps lend credibility to his crime fiction books. Not only that, Jim has traveled extensively and gains inspiration for his crime thriller novels from his travels. Some of the countries that Jim has visited include Peru, Brazil, Italy, Greece and countless others. From observing other cultures and gaining new experiences, Jim is able to infuse new life into his books and develop believable characters that readers can identify with.

At present, Jim has published four crime thriller novels in the Lou Malloy crime series: the run begins, dead money run, only two cats, and blue cat in paradise. They offer the readers just enough information to keep them guessing and trying to solve the crimes until the end of the books when they are actually revealed. Jim’s books provide fresh and unique takes on crime. They are not the same whodunit type books that have been done over and over again. By infusing his personal travels into his books, Jim creates characters and atmospheres based on just enough truth to be relatable.

Jim’s books have everything in them from robbery to prison to family. They have hard and soft elements simultaneously to really capture the life of a hardened criminal who is still very human and struggles with the same emotions as the rest of society. At the same time, Jim gives the reader perspectives from private investigators to balance out the story.

Jim’s books even have a hit of romance when his characters come to care for each other as more than just friends. Then, crime and love mixes to create a dynamic atmosphere that is even more complicated than ever before since characters care not only for each other but for their other family members as well. Jim has an amazing way of incorporating various elements into his crime novels to create thrillers that readers cannot get enough of. All four of his books in the series carry on one from the other to continue the same story concerning the hardened criminal who did 15 years in prison, Lou Malloy, and who comes to be his partner, private investigator, Hilary Kelly. The two of them go it together to create gripping stories that keep readers coming back for more.

Jim is an artist and creates all of his own book covers.

To learn more, go to http://www.jfrankjamesbooks.com/

'Dead Money' is an exciting story with a vibrant rhythm and the velocity of a fast car. This is the story of Lou Malloy, now an ex-convict after spending fifteen years in prison after robbing $15 million dollars from a casino. Once the word is out that he is free, the people he robeed will want their money back causing an endless game of cat and mouse. With the help of a PI (who happens to be a sexy woman), a prison friend and a deadly personality, Lou will dig deeper to find out who killed his sister and what's really going on.

Lou Molloy is a phenomenal character. He is the tipical bad boy that becomes the hero of the story, his means are not always "correct" and could be considered inmoral, and he has a tendecy of punching then asking. He his very smart and is always two steps ahead his enemies.

The story has a solid plot, an excellent writing and fresh dialogues. The author created a story with a sensation of vertigo and put the characters in a position where they have to be alert at all times. Despite bringing a new element and surprise with each chapter, the reading is easy to follow and the reader can complete the wholes with each new piece of the puzzle.

Overall, it's a great mystery book full with action and likeable characters. There are many books in this series and I can't wait to read what's next.