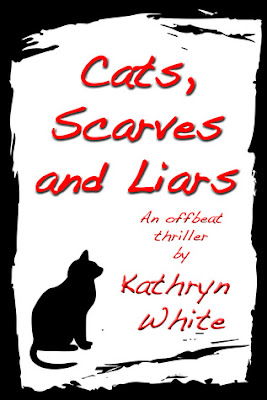 Meet Peppa Grove.  Peppa is just your average Australian young woman, really. 23 years old, widowed and owner of a cat who can speak perfect English. (But no one will believe her about the cat.) Why is she being stalked by one of the customers from her job at the City South Post Office? What secrets does the mysterious Ivory Black know about Peppa and her past? What does he know about the strange murders that are happening all over Adelaide? And was it really necessary for him to steal her boyfriend's scarf?Cats, Scarves and Liars is a quirky, offbeat tail tale from a unique Australian writer. You'll laugh, you'll cry you'll discover the meaning of life. (Actually, we lied about that last part.)

Writer, bookworm, poet. I am an independently published author from Adelaide, Australia. I enjoy writing fiction that features young characters who do not fit in socially or who fail to meet the expectations of others. I think that humour can be a powerful tool for discussing subjects that people are otherwise afraid to talk about.

This is the story of Peppa, a 23-year-old woman, recently widowed whose cat can speak. At first, it looks like a simple story about a simple woman. However, this story has many revelations and surprises. It turns and bends with comical characters making it a fun and entertaining book.

Peppa not only has a peculiar name. Her personality is likable despite she is shy and never think is good enough. Of course, once you read about her family you understand more about her. Julian seems like a sweet man and he is perfect for Peppa. Then we had the antagonist of the story: Ivory Black is a terrible and despicable man. His actions are awful and he has no trace of humanity. I think that I've never seen a man like him because redemption is clearly not one of his goals, he truly believes that his actions are correct.

Like I said there are many surprises. The book has time jumps so we can witness what happen in the past and the consequences in the present. Each chapter brings a new fact that keeps the story moving.

There were some things I wasn't expecting. It has absurd and bizarre elements that end up being hilarious. Ivory Black condition is so unreal and crazy that you have no remedy but to believe it’s true.

Overall, ‘Cat, Scarves and Liars’ is a different but great book. If you have read any book by Kathryn White, you will like it.