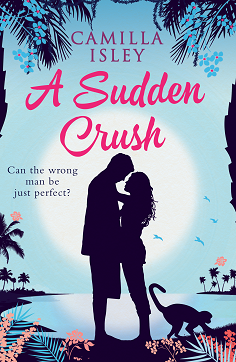 Joanna Price is a city girl with the perfect life. She loves her job as a book editor, she just married Liam, high profile bestselling author and the man of her dreams, and she’s headed to the Caribbean to enjoy two weeks of paradise for her luxurious honeymoon. Connor Duffield is a gruff, grumpy rancher from the Midwest. He is a country boy who has a no-nonsense approach to life, more scars than he’d like to admit, and he hates city girls.
So it’s just a misfortune they have to sit next to each other for a six hour plane ride. Even more so when their flight is caught in the perfect storm and Joanna wakes up stranded on a desert island with Connor, the very man she hoped she would never have to see again.
Why are they alone on this forsaken island? What happened to Joanna’s husband?
When her dream honeymoon turns into a hilarious tropical nightmare, Joanna’s first thought is survival. However, she and Connor will quickly discover just how boring paradise can be. As the days turn to weeks, and then months, this mismatched pair will have to learn how to coexist and how to resist the sparkles of an attraction they weren’t prepared to feel.
When they are finally rescued will Joanna’s marriage be saved as well, or will the life she knew and loved be in ruins?

Camilla was born in 1984. She's an engineer that has always had a vivid imagination and a more creative approach to life. After working in a corporate job for some years, she left everything to follow her husband around the world in a new adventure. Upon finding herself with loads of free time for the first time in a long while, she decided to begin pouring some of her fantasies into words...

Joanna has just married and is sitting on a plane headed to her dream honeymoon. Unfortunately, she and her husband arrived late to the airport and they have to sit separated and she is stuck with a grumpy man. But nothing will ruin her mood, she is a book editor and her husband a bestselling author, they have been together for years and everything looks perfect. However, fate decides to mess with her life. A tragic and mysterious accident leaves her stranded on a desert island with the annoying caveman.

Their time on the island is a survival adventure that lasts longer than anyone expected. They will have put their difference aside and work together while getting to know each other. Joanna will discover that Connor, grumpy man, is a skilled man with more than monosyllables on his dictionary. A sort of friendship will grow and maybe more. The time flies and there are hilarious moments. The solitude of the island presents various scenes where tension between them provokes fights and arguments that lead to funny results. There is even a sweet baby monkey.

Joanna is a great character. She is honest, hard worker, realistic and a positive person. She has her low moments but only because she is human. To Connor surprise, she has some useful resources on extreme situations. She has a growing experience both on the island like out of there. Now, let's talk about Connor. He sounds like the perfect male hero and it’s quite handsome according to his description. However, I think we could have read more about him. His past and present are described lightly.

The writing is great, easy to read, with fun dialogues and the passing is quite fast. It has all the ingredients of a great chick lit book. There is romance, friendship, family and good secondary characters.

I have to say that I loved the focus on Joanna's struggle leaving the love story aside. Despite being a chick lit, once they are back on solid ground the story centers on Joanna and the consequences of her time on the island. As a woman, reading about her re-invention and re-discovering was inspiring. After her whole life crumbles under her feet she has to reborn from the ashes and she does it with her head held high. Love is important but sometimes we need to be at peace with ourselves before thinking about a relationship. Great message here!