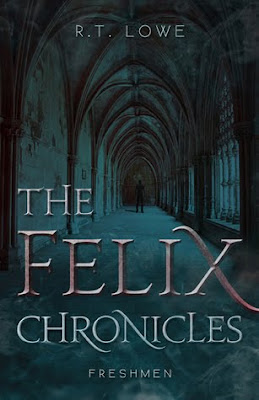 Reeling from a terrible accident that claimed the lives of his parents, Felix arrives at Portland College hoping only to survive the experience. In time, however, his reality star roommate shows him there is more to higher education than just classes, shared bathrooms and bad dorm food, and Felix gradually dares to believe he can put his past behind him. But a fateful storm looms on the horizon: In the nearby woods, two hikers become the latest victims in a series of gruesome murders; a disfigured giant embarks on a vicious cross-country rampage, killing teenagers who fail his 'test'; and an ancient society of assassins tasked with eradicating the wielders of a mysterious source of power awakens after a long silence. Only one man--the school's groundskeeper--knows that the seemingly unrelated events are connected, and that an eighteen-year-old boy stands in the center of the storm. 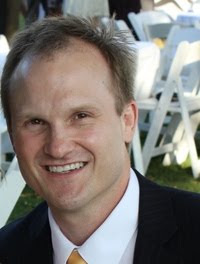 R.T. Lowe is the author of The Felix Chronicles: Freshmen (Book 1) and Five Days in January (Book 2) scheduled for release in May 2016. R.T. is a graduate of Willamette University and Columbia Law School. Originally from Oregon, he now lives in Newtown, Connecticut with his wife and three kids.

'The Felix Chronicles: Freshman' is a great fantasy story with a solid plot and good potential for future books.

This is the story of Felix, a freshman at college with a tragic past. His best friend Allison accompanies him and both of them are adjusting to college life. At the same time people are disappearing from a mysterious forest and danger is threatening humanity even though no one knows about it. A series of events take him to meet Bill, who unravels secrets about his past and puts on him a big pressure to become a powerful sorcerer.

Felix sounds like a typical eighteen-year-old boy. He lost both parents so he has to deal with the pain that comes with it but he is mostly a “normal guy”. He wants to play sport, get good grades and likes pretty girls. However, when an ancient warning is presented before him and magic becomes a real part of the world, he surprises us by being brave, strong and a powerful character. Allison is a really good friend with a real personality. I love that the author created a friendship between a man and a woman with no romantic implication. They support each other and go through a lot together.

The chapters jump to different scenarios and chapters, so we have a main story and a few other subplots going at the same time. At first is hard to understand what each event has to do with the other but once the story is on full motion we start to understand what is really going on and how each story is related.

The fantasy element is strong; the magic is almost an extra character. The bad guys are violent which brings a lot of action to the book. The writing is really good and the passing is steady so the reading flows naturally. I liked that the romance is a secondary matter, here we are focused on the fantasy. Not every book needs a romantic story (except romance books).

This is the first book so there are lot of questions left unanswered. I want to know how the famous guy will influence the story and I'm sure ERA will have a major role in the rest.