Hello again,
today I welcome author February Grace and her book 'Wishing Cross Station'. Keep reading and find out more about her and the book. I never set out to write a novel about time travel, and yet that is exactly what I ended up doing.

It all started with another art form I enjoy; painting.

Not that I’ve ever considered myself to be particularly good at it. I’ve never had the opportunity to study, and my style varies wildly from one painting to the next.

I marvel at artists who can paint a figure sitting in a room and make it completely true to life; as if they were going to step off the canvas and reach for you, or speak to you, living and breathing as the model that they painted was at the time the work was created.

I’ll never be that kind of artist. But I find art an enjoyable pastime anyway, even though I have a saying: some days you win, some days the canvas wins.

The story of Wishing Cross Station started on a day when the canvas was trying mightily to win.

Somewhere, in that mixture of colors that conveyed a chilling winter day, I found her.

Of course I didn’t know that was her name yet; in fact I ended up naming the painting “Girl in Scarf and Hat” because I didn’t know yet just who she was. But there was something in her blue eyes that haunted me, and I couldn’t stop thinking about it.
She seemed as though she was from another time, and as if she had a story she desperately wanted to tell me.

I started thinking about their gorgeous trains, and the Roundhouse where they maintain and keep them, and I suddenly was jolted by a thought: What if there was a secret passage in time below the Roundhouse of a historical theme park? One that took you back over a hundred years, to another train station, and the town that held it?

Wishing Cross… the name came to me quickly and it stuck. There was no other that I considered.

Soon as the idea was fixed in my mind my husband took me on a day trip to the theme park and I took photographs, spoke with tour guides, learned all I could that I could imagine I’d need to know to make a story out of my idea.

I even asked one of the men who work the Roundhouse “There aren’t any secret passageways or anything down there, beneath the floor, are there?” and he regarded me in the strangest way and replied, “No there aren’t, but that would make for a great story, wouldn’t it?”

I smiled and thought, yes, it will.

Wishing Cross Station takes a 19 year old college student named Keigan Wainwright back in time into the world of the girl from my painting; into Marigold’s world.

I invite you to step aboard the Aurelia Belle and travel back in time with him, to discover the secret past of a man who was there before him, a girl who was never meant to exist, and a love story you won’t soon forget.

You can find out more about February Grace by visiting her blog at www.februarywriter.blogspot.com.  She is also easy to find on Twitter @FebruaryGrace 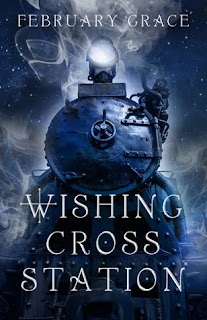 
"Don’t stay a moment longer than you have to. Don’t say too much. Don’t pollute the timeline."
When nineteen-year-old college library page Keigan Wainwright is sent to pick up a private donation of books for the school’s collection, he has no idea where one of those books will take him, or what it will take from him.
Retracing a powerful man’s footsteps through the past, Keigan finds himself caught in the same dangerous trap: falling in love with a woman he was never meant to know, and uncertain he will ever find his way home.
Wishing Cross Station: A bittersweet fantasy romance from the author of GODSPEED and OF STARDUST.