Happy Birthday to me!!
That's right today I'm turning 26!
To celebrate I have to reviews for a series of books you should read :) 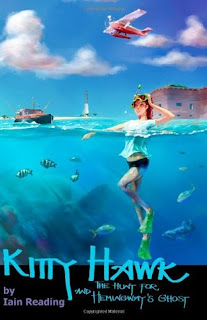 Kitty Hawk and the Hunt for Hemingway's Ghost is the exciting second installment in a new series of adventure mystery stories that are one part travel, one part history and five parts adventure. This second book in the series continues the adventures of Kitty Hawk, an intrepid teenage pilot who has decided to follow in the footsteps of her hero Amelia Earhart and make an epic flight around the entire world. After flying across North America Kitty's journey takes her down south to Florida where she plans to get a bit of rest and relaxation before continuing on with the rest of her long and grueling flight. As Kitty explores the strange and magical water world of the Florida Keys her knack for getting herself into precarious situations sweeps her headlong into the adventure of a lifetime involving mysterious lights, ancient shipwrecks, razor-toothed barracudas and even a sighting of the great Ernest Hemingway himself. This exhilarating story will have armchair explorers and amateur detectives alike anxiously following every twist and turn as they are swept across the landscape and history of the Florida Keys all the way from Key West to the strange and remarkable world of Fort Jefferson and the Dry Tortugas.

In this new adventure in the Kitty Hawk Flying Detective Agency Series, we accompany Kitty in her first stop during her around the world tour.

Unlike the first book in this one it seems as Kitty isn't in any real dangerous situation and she witness the action from afar. However, this is not true; she has a key role to solve the mystery behind the ghost boats and the mysterious rocks. It's true that last time she was face to face with the men behind the gold but this time she is smarter (she learnt a lot from her previous experiences) and manages to catch the bad guys without putting herself on the line of fire.

Now that she plans to go around the world, we see her being fully independent. She has to make all the choices and live with the consequences. Her last adventure helped her become a mature and confident woman with a wild spirit and a thirst to discover the world.

Again, the author uses maps and history to create a solid background. He also adds interesting facts and uses real information that helps to really imagine the scenes and the story.

The writing is very good. I loved how the author narrates the action scenes in a way that really captures the adrenaline and the emotions. It’s easy to picture the scenes as they unravel.

Like I said last time I love Kitty. She is so real and human, she is the perfect heroin for these adventures and I can’t wait to read the next one. 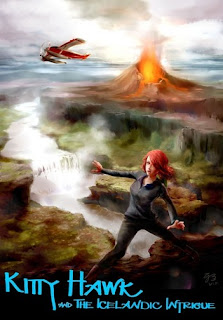 
Following in the footsteps of her hero Amelia Earhart, Kitty Hawk sets off on an epic flight around the world and arrives in Iceland's capital city of Reykjavik where she finds herself immersed in a beautiful alien world of volcanoes, Vikings, elves and trolls. Before she knows it Kitty is plunged head first into an amazing adventure that sweeps her across a rugged landscape where humans and nature exist side-by-side in an uneasy truce and magical realms seem to lie just out of sight beneath the surface.Kitty Hawk and the Icelandic Intrigue is the dazzling third installment of the Flying Detective Agency series featuring Kitty Hawk, an intrepid teenaged seaplane pilot with boundless curiosity and a knack for getting herself into - and out of - all kinds of precarious situations.This is a perfect book to fire the imaginations of readers of all ages - armchair explorers and amateur detectives alike. From dangerous criminals and corrupt government officials to mystical beings and clashes with the elemental forces of nature, this book has it all. Come and join Kitty Hawk as she experiences the strange and extraordinary world of the Icelanders, and unravels the Icelandic Intrigue.

Just when I thought The Kitty Hawk series couldn’t get any better, I go and read book 3 and end up loving the series even more. Book three is for me the best by far, the action takes a bigger level and the danger is mortal.

This time Kitty visits Iceland and from the moment she sets a foot on land wonderful scenarios surrounds her and a land with a rich culture receives her with open arms. I can't even explain how amazing this country looks, many of their costumes sound odd at first and their food sounds exotic. I always say that Iain does a great job describing the places and the people but this time he does an EXCELLENT job bringing color and life to a place that sounds cold and colorless when you first think about it.

As usual Kitty does an outstanding job as the heroine. She is amazing, honest, brave, funny and real. This adventure takes her to riskier places; she even has to face bullets and mysterious Russian men.

I also enjoyed how the author included some of the Icelandic folklore and used the magic and fantasy from local people to complete the story. And of course I have to talk about the environmental aspect of the story. I’m quite a green person so I really loved that he used this opportunity to talk about a topic that involves us all.

I can’t wait to read more of Kitty’s adventures and her journey around the world.

“In the Kitty Hawk Flying Detective Agency Series the heroine finds herself in a new geographic location in each book. The series will eventually have a total of 13 books in it (maybe more) and her flight around the world will be completed in the end,” says Iain. “The books are sequential but one could definitely read any of the later ones before reading the earlier ones.”
For more information, go to http://www.kittyhawkworld.com/

Iain Reading is passionate about Root Beer, music, and writing. He is Canadian, but currently resides in the Netherlands working for the United Nations.
Iain is the author of the Kitty Hawk Flying Detective Agency Series, The Wizards of Waterfire Series, and the dragon of the month club. To learn more, go to AMAZON
Connect with Iain on Facebook, Twitter, and Goodreads.