The Blackwell Family Secret: The Guardians of Sin @jonandaaron 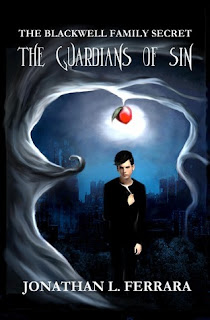 Seven deadly sins have been unleashed, and the only one who can defeat them is the boy who set them free. Nicholas Blackwell has no idea he is supposed to fulfill a destiny. All he knows is that he draws trouble like a magnet. Orphaned at seven when two demonic men killed his parents, he copes with the strict rules of his new home, St. Christopher’s academy, unaware that he has been the real target for the killers and that his guardian angel has saved him in the nick of time. And now, his problems are only beginning when a mysterious serpent lures him into the woods and tricks him into a demonic ritual that will unleash the Seven Deadly Sins to destroy the humankind. Nicholas has no choice but to correct his mistake--or die trying.Aided by Amy, a shy but determined girl who seems to know more about his task than she should, Nicholas's quest is to travel into the City of Demonio and defeat the Seven Guardians of Sin. To succeed, he must confront demons, monsters, and lost souls, learn the mysteries of the Chapel of Dreams, discover the true meaning of friendship and love, and face the darkest secret of all: the Blackwell Family Secret.

Jonathan L. Ferrara was born in San Pedro, California to an Italian fisherman and a mother from New York. Growing up with one older brother, Jonathan had several hobbies: finding the best hiding spots to jump out and scare his mother, discovering new fantasy book series, and imagining outrageous, whimsical worlds full of magic. He is now happily married, residing in California in the City of Angels. He has two wonderful children-his dog Koda and cat Merlin.
WEBSITE | FACEBOOK | TWITTER | GOODREADS | AMAZON|

After witnessing his parents' murder and been sent to St. Christopher’s Academy, Nicholas Blackwell has grown up to be a normal teenager that has a tendency to get into troubles and is popular with the ladies.

The story is basically the fight between good and evil. It's the story of a boy that has to face the seven sins and its protectors to avoid bigger dangers. The story uses a lot of biblical elements and they are well combined. The evil snake, the forbidden fruit and the angels stuff are all in there. In general, all the elements create a solid plot, with a fast passing and believable outcomes.

Nicholas is of course the perfect hero, with flaws that make him more human and always making the right choice. Amy is his companion and aids him trough the journey. They are both great characters with a few obvious aspects but entertaining nonetheless.

Overall, I liked the story because it is easy to read, simple to understand and there are scenes with good doses of action. I have to say that there passages of the book that reminded me a lot of Alice in Wonderland.

I only gave it 3 and a half start because there wasn't really any moment that truly blown up my mind. It's a good read but I still needed a WOW moment.

If fantasy-paranormal is a genre you enjoy you could give it a chance remembering the strong catholic element behind the plot.

Email ThisBlogThis!Share to TwitterShare to FacebookShare to Pinterest
Etiquetas: Fantasy, paranormal, Review, YA