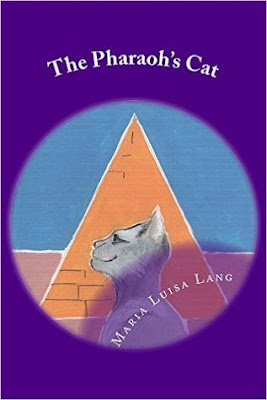 The Pharaoh’s Cat, narrated in the present tense by the cat himself, is the story of a free-spirited, quick-witted stray in ancient Egypt who suddenly finds himself with human powers joined to his feline nature.
The cat immediately captures the attention of the seventeen-year-old Pharaoh, making him laugh for the first time since his parents' death, and is brought to live with him at the royal palace.
The cat also becomes friends with the High Priest of the god Amun-Ra and seeks his help in solving the mystery of his human powers and the supernatural manifestations that later plague him. He has an enemy in the Vizier—the Pharaoh's uncle and the second most powerful man in Egypt. The Vizier hates him for himself and even more for his relationship with the Pharaoh.
The cat participates in festivities at the royal palace, developing an insatiable appetite for good food, wine, and gossip. He later accompanies the Pharaoh on a trip through his kingdom, all the while renewing the Pharaoh’s ability to enjoy life and inspiring him to become a stronger leader. Between the cat and the Pharaoh a bond of love gradually forms which will determine Egypt's destiny.
The Pharaoh's Cat imaginatively blends Egyptology with comedy, drama, and even time travel--the cat and the High Priest will meet Elena, a resident of the twenty-first century and the daughter of a renowned Egyptologist.

Maria Luisa Lang was born in Rome, Italy, and lives in New York City. She has a degree in art from the City University of New York, and her artwork has been exhibited in New York galleries.
She often returns to Italy to visit her family. She has also stayed for extended periods in Bath and London. She loves all animals and is an amateur Egyptologist. Her love of cats and ancient Egypt inspired her to write two novels about them. The Pharaoh's Cat is her first novel. She has almost completed its sequel, The Lady of Mystery.

So this is the story of a talking cat but not any ordinary talking cat. This special feline becomes friends with the Pharaoh as soon as he acquires human abilities. Is this friendship what would take him to many adventures and funny situations.

The story is a bit slow at first and the reading seems shallow somehow. We have a talking cat but he doesn't really do anything extraordinary. His fight with the Vizier has some funny consequences and we have some scenes that make you laugh. Overall, the journey through Egypt is ok and we get to know the characters.

Luckily, half around the book things got interesting when the time travel finally happened. The actions leading to the time jump are quite interesting and from then on the story becomes faster and more exciting.

The writing is good, the language is appropriate and the book is less than 200 pages so it’s fast to read.