Review: The Half Killed 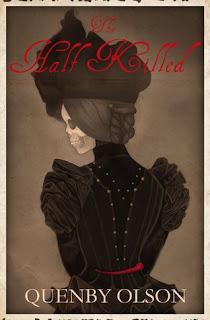 Dorothea Hawes has no wish to renew contact with what lies beyond the veil. After an attempt to take her own life, she has retired into seclusion, but as the wounds on her body heal, she is drawn back into a world she wants nothing more than to avoid.
She is sought out by Julian Chissick, a former man of God who wants her help in discovering who is behind the gruesome murder of a young woman. But the manner of death is all too familiar to Dorothea, and she begins to fear that something even more terrible is about to unleash itself on London.
And so Dorothea risks her life and her sanity in order to save people who are oblivious to the threat that hovers over them. It is a task that forces her into a confrontation with her own lurid past, and tests her ability to shape events frighteningly beyond her control.

Quenby Olson lives in Central Pennsylvania where she spends most of her time writing, glaring at baskets of unfolded laundry, and chasing the cat off the kitchen counters. She lives with her husband and two daughters, who do nothing to dampen her love of classical ballet, geeky crochet, and staying up late to watch old episodes of Doctor Who.

The Half Killed could be labeled as a psychological thriller story with good doses of suspense. It all begins when Julian Chissick, a former priest, contacts Dorothea Hawes. He need help to find the murderer of a Young woman. A simple murder turns into a series of dead bodies and a threat that puts everyone at risk.

The story deals with spiritualism, sessions and a world beyond our own. The rhythm is steady and the characters are good. The writing is really good, the author creates a dark atmosphere and there's an air of suspense and dread around the entire story.

Dorothea, a medium if you want to call it, is the main character of this story. She is a broken, tormented young woman with a shady past. Discovering what happened all this years ago is part of the story. Julian was an odd character, I liked him but he didn’t stand out.

My problem was that I struggled to read the first half of the story. I started the book twice and despite having a really good writing there was something off, for me. I couldn't relate with the characters, I didn't connect to the story and it was hard to focus on reading it.

Luckily, around half the book the story becomes something more, or at least for me this was the part where I was intrigued about what was coming next. The killer's identity is something we all want to discover and the interaction between Dorothea and this other world it's almost addictive.

I think that for someone who enjoys dark stories, this book would be perfect. If contacting with the afterlife is a topic you enjoy in your books, again maybe this one is for you.