LET'SCELEBRATE THE RELEASE OF THE THIRD BOOK OF THE CADICLE SERIES
I HAVE A REVIEW FOR BOOK ONE AND LET ME TELL YOU SHOULD READ THIS BOOK! 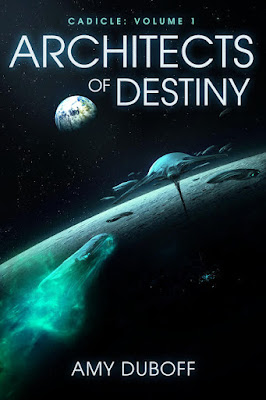 Out of sight beyond Earth, the Taran empire spans the galaxy from its seat of power on Tararia. Cris Sietinen was born with rare telekinetic gifts—abilities he refuses to ignore, regardless of the governing Priesthood's decrees. But, as heir to the most influential Dynasty on Tararia, only a stifled life of business and politics awaits him within the confines of his family's estate. Determined to be true to himself and explore the potential of his abilities, Cris leaves Tararia to begin a new life touring the stars. When Cris unexpectedly receives an invitation to join the Tararian Selective Service (TSS), the only organization to offer an official telekinesis training program, a new future awaits. It's his dream opportunity to be among people like himself, free from the Priesthood and political objectives. Except, Cris' path was designed, and he's right where the Priesthood wants him. Architects of Destiny is the first installment in the Cadicle series. A fast-paced space adventure with intrigue, coming-of-age and romance, this short novel is a prelude to the defining events in Tararia’s history in the ensuing years.Is it possible to change destiny? The Cadicle series follows three generations of the pivotal Sietinen Dynasty as each learns their part in an elaborately orchestrated galactic conflict. Torn by politics, love and war, the Cadicle and those he holds most dear must choose between duty and morality as the true nature of their purpose unfolds. Through their roles as Agents in the Tararian Selective Service, they will be on the front lines of space battles, but the political skirmishes they must face on Tararia could prove just as dangerous. The Cadicle holds the key to winning both, but at what cost?

Amy has always loved science fiction—books, movies, shows and games. She was born in San Diego, Calif., and moved with her family to Vancouver, Wash., at the age of seven. After devouring some of the classics like Dune and Ender's Game in her tween years, she began writing science fiction and fantasy short stories.
In the ensuing years, Amy attended the Vancouver School of Arts and Academics, where she continued to study creative writing, visual art and played viola in the school orchestra. During this time, she began the very early sketches of what would eventally evolve into the Cadicle series.
Amy received a Bachelor of Science degree in Psychology from Portland State University, and also pursued minors in Professional Writing and Business Administration. After graduating, she moved to Portland, Ore., and began working in business development for an energy efficiency consulting firm. Over the next several years, she primarily wrote proposals to prospective utility clients and managed the proposal development process. She recently transitioned from energy efficiency into the architectural, engineering and planning industry.
Amy currently lives in Portland, Ore., with her husband. When she's not writing, she enjoys travel, wine tasting, binge-watching TV series and playing epic strategy board games.

Arquitects of Destiny is the begining of a series and acts as a prequel for it. As such the book is very dynamic, energetic and exciting. It presents the Tararian Universe using simple words and effective explanations. It's really easy to follow and despite being science fiction all the elements are understandable for all of us. The space travel and the different actors are well built and they come in colorful and vivid descriptions.

The story follows Cris a young boy destined to be the heir of a huge Dynasty who choose to escape and create his own path. There are small time jumps so we can see him grow and finally enter the Tararian Selective Service where he meets his right path.

There is romance, friendship, danger and hidden plans in this story. The characters sound real and their personalities are believable.

The rhythm is constant and the action never stops. The words fly and suddenly the book has ended.

Overall, Architects of Destiny is a fast, dynamic and complete sci-fi book that puts the bar high for the next books in the series. I can't wait to read more.