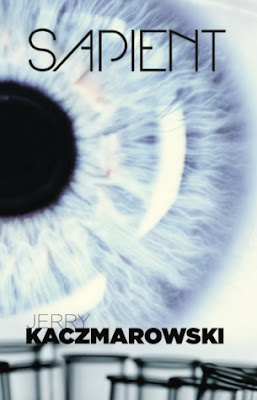 Abandoned by her husband after the birth of their child, Jane Dixon’s world is defined by her autistic son and the research she does to find a cure for his condition. She knows her work on animal intelligence may hold the key. She also knows that the research will take decades to complete. None of it will ultimately benefit her son.
All that changes when a lab rat named Einstein demonstrates that he can read and write. Just as her research yields results, the U.S. government discovers her program. The army wants to harness her research for its military potential. The CDC wants to shut her down completely. The implications of animal intelligence are too dangerous, particularly when the previously inert virus proves to be highly contagious.
She steals the virus to cure her son, but the government discovers the theft. She must now escape to Canada before the authorities can replace her son’s mental prison with a physical one.

Jerry Kaczmarowski lives in Seattle with his family. He writes techno-thrillers that explore the benefits and dangers of mankind's scientific advancement. His first book, Moon Rising, was released in June 2014.  His second book, Sapient, was published in April 2015.

Jerry spent the first twenty years of his professional life in the consulting industry on the West Coast. His fascination with technology is matched only by his love of stories. His books intertwine action with a keen insight into how technology will shape our lives in the coming years.

First of all thanks for agreeing to this interview.
Let’s start with your book Sapient…

Ruty: Describe the book in one sentence.
Jerry: Sapient is a young adult book that shows how our ability or inability to trust others can impact our lives.

Ruty: How did you come out with the idea for it?
Jerry: One of the most damaging things I’ve seen in the workplace is an inability to trust others.  The people that I’ve met who are most challenged to be successful in life are those that always assume that people are out to get them.  Those that can show some faith in others often seem to thrive.
Beyond the weighty theme of trust, I always loved the Planet of the Apes movies when I was a child, even with all their awful 1960s/1970s acting.  I wanted to write a book that covered important themes while weaving in animal intelligence.

Ruty: Did you have to do a lot of research to create a believable plot?
Jerry: A ton.  A large part of my research focused on autism—it’s causes, symptoms, the effect it has on other family members, etc.  I wanted to be particularly sensitive to writing a book with a character with special needs as it is very easy to alienate an audience if poorly handled.  The research on animal intelligence and animal intelligence testing was also fascinating for me.  Much of the setting was familiar for me, so it required less research.  I’ve spent years working in the Bay area, and I’ve lived in Seattle for over a decade now.

Ruty: Did you have any special reason to choose a woman with an autistic child for the main character?
Jerry: My mother went to college to be an occupational therapist to work with children with special needs in part because she had a younger brother who fit this category.  I’ve always been inspired by her decision, so I wanted to weave this into Sapient.

Ruty: How long took you to write it?
Jerry: It takes me about three months to get a decent rough draft completed.  I then have to put the book aside for a month so I can create some distance between myself and it.  If I don’t, I get too enamored with bad ideas that need to go.  After the month passes, it takes me another two to three months to edit the book.  All told, it is about half a year per book.

Ruty: While I was reading Sapient I could imagine it as a movie. Would you like to see the book turned into a movie?
Jerry: Yes.  I imagined Sandra Bullock as the mother in the story.  I never quite found a good child actor that could play Robbie.  I would be interested in any recommendations you or your readers have!

Ruty: What’s your favorite writing scenario?
Jerry: I’m most creative and energetic in the morning.  I grab a cup of coffee and sequester myself in my office which is downstairs in our house.  I can generally get a solid 4 hours of writing in during the morning hours after which my creativity starts to wane.  My office is also where I work out.  When I get really jammed up, I pause and do pullups on my pullup bar until a good idea comes to me.  Needless to say, I can now do a lot of pullups.

Ruty: With or without music?
Jerry: Definitely without.  I need almost complete silence to think.

Ruty: Who is the first person you talk about when you have a new idea?
Jerry: My wife.  She often sees the world through a very different lens than I do.  I find it very helpful to speak with people with different perspectives than mine rather than people who will just parrot back thoughts to me that are already my own.

Ruty: What are you working in right now?
Jerry: I just finished a book called The Black Rose which is a young adult book set in Nazi Germany.  It is loosely based on the real world teenagers who formed a group called the White Rose in Germany to protest Nazi policies.  Sadly, they were all captured and executed.

The next project I am starting is a departure from fiction.  I want to write a non-fiction book on personal finance aimed at young adults who are just getting out of high-school or college.  It’s a large gap in our high-school and college curriculums.  I’m writing it in part for my own children to help them get prepared for the world as they leave home in the coming years.

Sapient is a fantastic science-fiction story that shows us how far we could go to help those we love and how the consequences of our actions can have a worldwide effect.

Jane is a researcher whose ultimate goal is to find a cure (or something similar) to help her autistic child and the autistic community. Her job consists in experimenting with animals and this is how she helps Einstein and Bear to become more than a rat and a dog. It all starts to go down the road when the CDC and the US military get involve.

It’s easy to imagine this book as a movie. Its fast rhythm, the sense of movement that the words create and the action that never stop, create a story that catches your attention and never lets you go. The reading is super easy to follow but it still has a solid, complex and realistic plot. There are no holes in the story, because everything is taken care off. Another great thing was the changing POV, it allows to follow the story from all the perspectives.

Jane is a great character as well as her son Robbie. I think that anyone who has children or a kid in their life will understand her actions. She is an admirable woman, strong and brave. I enjoyed reading about Robbie and the world inside his head and how he evolves along the story.

The author did a magnificent job including the autistic world to the story. You can see that he did an intense research to create a believable character.

I absolutely loved Einstein and Bear, I’m an animal lover so imagine them as beings with an intelligence equal or superior to ours was amazing and very entertaining. They're super funny and essential to the story.

Overall, Sapient is a book with great characters, solid plot and a good outcome. It gives us the chance to think about our actions and how much they affect the world. It also brings to the table the impact that a simple change in any animal DNA could have on the environment.