Review: I Wish for You @camillaisley 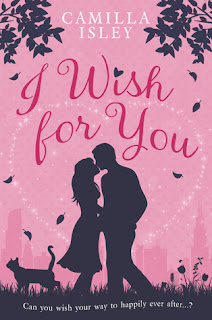 If all your wishes could suddenly come true, what would you do? A year ago when the love of her life dumped her for no apparent reason, Ally thought she had hit rock bottom. But now that she has seen him with another woman, and one she knows only too well, her life seems to have reached a whole new level of low. Yet, when she stumbles across an ancient object infused with magical powers and a stranger with a dark past appears out of nowhere promising to grant all her wishes, she finds herself hoping again. Suddenly Ally’s life is turned upside down; she has a mystery to solve, a rival to beat, a millenarian curse to break, and well, she wants to have some fun playing with her new “gifts”… But can she wish her way to happily ever after?

Camilla was born in 1984. She's an engineer that has always had a vivid imagination and a more creative approach to life. After working in a corporate job for some years, she left everything to follow her husband around the world in a new adventure. Upon finding herself with loads of free time for the first time in a long while, she decided to begin pouring some of her fantasies into words...

Ally is having a rough weekend after discovering that her archenemy is dating her ex-boyfriend. A trip with her mother to the market leads her to discover an ancient artifact that holds captive a handsome British mystery man who says can fulfill five of her wishes.

The story moves on quickly when Ally begins to ask for her wishes with one clear goal: get her ex back. I found really entertaining and hilarious listening to her wishes and witnessing the consequences of them. You could critiqued her wishes and label her as vain, superficial or shallow. But let's be truly honest... many of us would choose the same things. Beauty, money and power are the things that move our world and even though we all know they are not what really matters we all are a bit shallow sometime. And this is fiction and it's really fun to see her plot her big revenge when you know that ultimate what she needs is right in front of her.

Ally has a real personality. As I said you could say she is too superficial or stubborn but she is a woman who believes the love of her life is her ex and he's the only one who can make her truly happy (I'm sure many women can relate to that). She won't listen to others because she has to discover by herself who she really wants to be and who she is meant to be with. Arthur is also a great character. His story was quite interesting and I think it was a good addition to the book.

There are elements of the book that are really obvious and they follow the formula of many romance stories but despite being totally predictable romance lovers will adore them.

The writing makes the book fast and easy to read. It’s a book that will take only days to read but will leave you happy and with a smile on your face.

Overall, I Wish for You is a really sweet romance. It’s perfect for those who love light romance and happy endings.