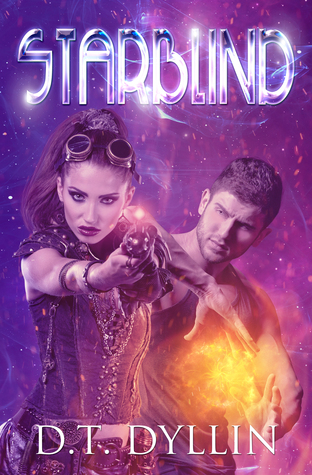 
Owner of the Chimay grade starship dubbed The Pittsburgh; Captain Jane Sevis is one of the best bounty hunters in the galaxy. Except for the occasional problematic hunt, her life is pretty uncomplicated.
When a particularly slippery target reveals the real reason for being in her database, her world is turned upside down in more ways than one.
Will she follow her gut and look the other way for the man she may be falling for?
Or will their love fall prey to her mercenary heart before it gets a real chance to ignite?

D.T. Dyllin is a bestselling author who writes both New Adult and Adult Romance. As a romance junkie, anything with a love story is her kryptonite and her obsession is what first drove her to begin twisting her own tales of scorching romance.

D.T. was born and raised in Pittsburgh, Pennsylvania. (Black & Gold for life, baby!) She now lives in Little Rock, Arkansas with her husband and two spoiled German Shepherds.

Starblind presents us a universe where humans are not the only species on it. In this universe Jane Sevis, a bounty hunter, is looking for a place to belong. Missing an Earth she never knew, she surrounds herself with old antics from a no longer existing planet.

Jane’s life changes when she meets Ash, altering her and her crew destination. Attracted to him on a primal level she has to decide either hand him over or give in to the attraction. Duty and passion will mix only to unravel well hidden secrets not only about her but about the system ruling the universe.

As every book by D.T. Dyllin this one is a wild ride where there's no rest. Action kicks in every time we turn to the next page, passion and tension is always present when the main couple is together. And every time you think you figure something out the author comes and blows your mind with a new surprise.

Jane is the kind of heroin we are accustomed from Dara, she is stubborn, fearless, strong but also vulnerable. She is loyal to her friends and it's not afraid to fight for what she thinks is right.

I really liked the universe created by the author. The different species are well described, the ships and the space travel is believable. I'm a sci-fi fan and I loved it!

Another thing I liked was the role given to sex. Usually sex scenes are built upon tension and they are something you start to wait. This is not a bad thing but when you start to anticipate the heated scenes you might forget about the story. Here sex is just something that happens, and I really think it was smart. This is a sci-fi romance with sex on it and it is used as a resource that helps characters get closer and bond in a more intimate way.

Starblind is really exciting, funny and entertaining. I can’t wait to read more about Jane Sevis and her friends.