So many authors begin in one genre and then bounce to another one, each time recreating stories, character and plots before they settle on the genre that’s feels most comfortable for them. Author Christopher Cloud is not exception, writing in different genres until he felt that his writing was tailored for the middle-grade and young adult readers.

He once stated that during an interview that a writer’s number one goal is to find a genre with which you are comfortable. Create some interesting characters, write smart narrative, keep the tension high throughout your story, and give it hell. A good story will always find a home.
Read more in our interview with this award winning author.

Q:  What is a typical writing day for you?  Tell us about a day in the life of you the writer, what’s your writing day like. Do you balance family and writing, or writing and a job outside the house, or writing, a job and family? What was it like for you to write this book along with your busy life?

A:  I typically write four or five hours a day, six days a week. I am retired, which means simply that I can devote more time to writing than if I held a fulltime job. I admire writers who can hold down a 40-hour-week job and still find time to write…and share their time with a family. That’s a tall order. I’ve often said that if I had to write a novel on a manual typewriter—I worked in newsrooms years ago when manual typewriters were standard fare—that I probably wouldn’t write. That’s a bit of an exaggeration, but PCs have certainly made writing easier. Also, I find myself conducting research for every novel I write. The wealth of knowledge found on the Internet makes life so much easier for writers like me who research their stories. I can’t imagine spending hours a day in a library conducting research.  It’s a brave new world of technology, and I love it.

Q: What has been the biggest accomplishment you have achieved since becoming published?
A: It took some time to find the genre with which I was most comfortable. Finding the genre has been a big step forward.

Q: If you could have chosen another profession, what would that profession be?
A: Film director. 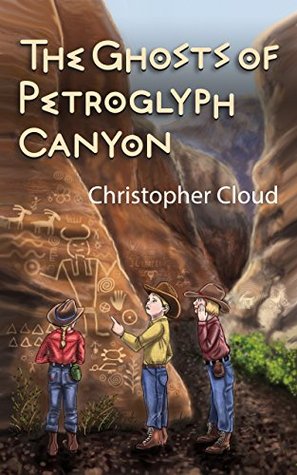 
School is out for the summer and Pablo Perez, his sister, Pia, and their cousin, Kiki Flores, visit the Bar-7 ranch in New Mexico. The young Missourians have come to help their Uncle Antonio with the annual cattle roundup.
Uncle Antonio introduces his nephew and nieces to hundreds of primitive petroglyphs that have been chiseled into the walls of a nearby canyon—Petroglyph Canyon. The primitive rock drawings are part of Uncle Antonio’s sprawling cattle ranch. Sadly, looters are routinely excavating the ancient drawings with high-tech rock saws. Uncle Antonio believes the looters are selling the glyphs.
Pablo, Pia, and Kiki are determined to put a stop to the looting, and that’s when the adventure begins.


Author Christopher Cloud is back with the sequel to his popular middle grade novel, A Boy Called Duct Tape. Once again the summertime adventures continue for Pablo and his sister Pia. Along with their cousin Kiki they set out for more action and adventure in The Ghosts of Petroglyph Canyon.
Take a sneak peak of The Ghosts of Petroglyph Canyon here.

Award winning author Christopher Cloud began writing fiction full time after a long career in journalism and public relations. He writes middle-grade and young adult novels.
Cloud graduated from the University of Missouri in 1967 with a degree in journalism. He has worked as a reporter, editor, and columnist at newspapers in Texas, California, and Missouri. He was employed by a Fortune 100 company as a public relations executive, and later operated his own public relations agency.
Cloud attended high school in Japan, and lives in Joplin, Missouri.

The Ghost of Petroglyph Canyon is the story of three kids and their summer adventure. Everything start after Pablo, Pia and Kiki are introduced to some old petroglyphs on the walls near a canyon. These works of art are part of their Uncle's ranch; however, they suspect someone is stealing them.

The story has a fast rhythm brought by the choices made by the kids in their quest to discover who is cutting out the glyphs. With a mix of action, Indian American legends and the bravery of the three young kids, the story results being an exciting tale for people of all ages.

This one is the perfect example of middle grade-early YA because it has a simple but engaging writing style. The dialogues are short and real. The characters are innocent but determined at the same time and due to their vision of a righteous world they are not afraid of facing the bad guys.

Overall, I really enjoyed the book. I think that no matter how old are you the book offers a lot of things for you to enjoy: great characters, beautiful scenarios, easy to read language and a good doses of action.