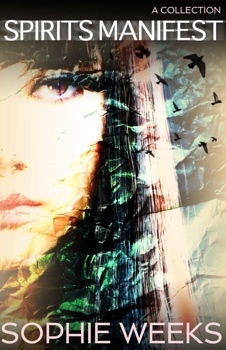 
Two ordinary young women, new to adulthood, seeking to define their futures against a world that has already defined them. Two uncanny encounters with a world of spirits hostile and benign. This intriguing collection contains two novels that deftly blend poignant human drama with unleashed supernatural bonds. Two stories of hope, and finding the courage to break from traditions that haunt us.
Margaret Campbell of The Soured Earth said goodbye to broad prairie skies a long time ago in favor of college, the East coast, and a budding career in fashion design. But when called home in the aftermath of a family tragedy, Margaret faces more than just new responsibility. A local Native American ritual goes awry, and the larger community is plunged into chaos as a devastating blight settles over the land. Margaret finds comfort in the arms of Gene, a thoughtful ranch hand with a heart full of wanderlust, but will the pull of family ties and new desire be enough to quiet her own ambitious yearnings?
Sarah Markham of Unsettled Spirits thought she had everything figured out. Leave home, go to college, build a new life. It's the last part that proves tricky when Sarah, unable to find a job that matches her lofty ambitions, takes on a job and a room in a haunted bookstore owned by an eccentric intellectual. Lucy Larch, dead for over half a century, has been waiting for someone to help her pass over—but can Sarah, herself perplexed in matters of life and love, find a solution? Born in Phoenix, Arizona, Sophie Weeks received a Masters degree in English Literature from Mills College in 2006 and completed her PhD in Victorian Literature at Rice University in 2013.
Sophie resides in Payson, Arizona with three furry miscreants, who are wanted in multiple states for criminal adorableness. She is also the author of Outside the Spotlight and Unsettled Spirits.
Learn more at:
WEBSITE | FB | TWITTER | GOODREADS | AMAZON|

At first I didn't know how the two stories could be related but as the blurb says these are the stories of two young woman finding their place in the world, fighting for their dreams and dealing with life. One of them has a strong, evident paranormal element while the other is a more a contemporary story.

Overall, both stories are really good and present real women. Both Margaret and Sarah are down to Earth with real dilemas and understandable problems.

From now on, I will focuse on The Soured Earth because I already reviewed Unsettled Spirits. Margaret's story begins when her grandma suffers a stroke and the fear of losing her makes Magaret come home. The ranch she always tried to run away from suddenly becomes her house. Add to the mix two teenager girls who lost their parents and a series of natural obstacles.

I think this one was a good story but there was not breaking point, Margaret was true to herself but there was no great change or something that make me say wow! It's a simple story about a young woman who wants to help her family but at the same time her dreams don't include staying in charge of the family ranch.

The author did a great job creating a solid plot, I can't imagine how hard is to sustain a ranch and all the work it involves. We can see through Margaret and her family the dispair caused by nature and how hard life can be. I like how they had to struggle with the consequences of an unknown enemy.

The romance is super light and honestly when she decides to approach Gene I didn't feel the connection and it was like what?? It felt rushed and unreal.

However, I liked that the author included some difficult topics like kids and technology and how they don't realize that every post, photo, message they sent, stays there forever and can ruin some lives.

Overall, it was an enjoyable story with simple language and interesting characters.