Review: Something to Talk About @DakotaCassidy 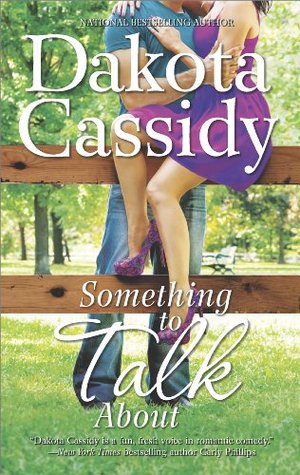 
Sexy is as sexy does. And in Plum Orchard, sugar, it does!
Emmeline Amos is sick of her ex saying she's boring and prissy. After all, she works for a phone-sex company! (As general manager, but still.) On a rare girls' night out, fueled by blender drinks and bravado, Em accepts a shocking dare to handle a call herself. But it's tipsy Em who gets an earful from an irate single father on the other end of the line. Awkward.
But not as awkward as discovering that same mad dad is Call Girls' gorgeous new programmer. Jax Hawthorne is still upset that his daughter called the "girlfriend store" on his behalf, but he can't deny he'd choose a hot-librarian type like Em if he were looking for love. Which he's not.
Em wants to do more than just talk the talk. So she makes a bawdy bargain with Jax. They've both been burned before this time, they'll keep it strictly physical. Except as soon as they settle on no strings attached, things start to get tangled….

Dakota Cassidy lives for a good laugh in life and in her writing. In fact, she almost loves a good giggle as much as she loves hair products and that’s saying something.
Her goals in life are simple, (like really simple): banish the color yellow forever, create world peace via hot rollers and Aqua Net; and finally, nab every tiara in the land by competing in the Miss USA, Miss Universe, and Miss World pageants, then sweeping them in a stunning trifecta of much duct tape and Vaseline usage, all in just under one week. Oh, and write really fun books!
She loves people, loves to chat and would love it if you'd come say hello to her on the Yahoo! group she shares with two other terrific authors at—The Truth About Big Hair, Books and Babes. Join Dakota and friends in the chaos and send an email to TTABBB-subscribe@yahoogroups.com or visit her website.
Dakota lives in Texas with her two sons, her mother, more cats and dogs than the local animal shelter and has a boyfriend who puts the heroes in her books to shame.

When you live in a small conservative town, people will gossip about everything you do, specially if you work for a phone-sex company and your ex-husband likes to wear dresses. This is Emmeline's life with two young kids included.

All her life Em has been told how to act according to what people think and what's right to get into Heaven. A strict and non-demonstrative mother plus a failed marriage have left her a bit damaged. Enters a sexy, strong, mysterious single father with a body that could turn any saint woman into a sinner. When she decides to give in to temptation all of her beliefs will crumble and fall into pieces.

I absolutely love Emmeline's personality despite being a bit annoying for moments. If you think of the environment she grew up it's easy to understand why she is so insecure and is so afraid of being happy. Also, she is really human and real, at 36 she is a natural woman with all the physical "flaws" woman have at any age. I love her insecurities and the fact that they only make her more beautiful. Jax is everything she needs and more, sexy, kind, strong, smart and a devil in bed, he is the perfect knight in shiny armor. Another thing worth mentioning is the love each one has for his or her children (or in Jax case his daughter).

Their relationship is full of tension but it also includes a lot of laughs and tender moments. I enjoyed watching them fight the attraction and trying to have a no strings attached relationship. The author writes really good sexy scenes, where you can feel the heat and the trust they have on the other person.

If you want to know about the plot, it's simple but entertaining. There are some twists and surprises.

I have to say that I almost hate the ending. It felt rushed and some parts sounded a bit unreal. And the cover doesn't reflect the story if you ask me.

Something to Talk About is the second book in a series but you can read it as an standalone, I did it and I could easily understand the story.

Overall, this one is a good romance with interesting characters.