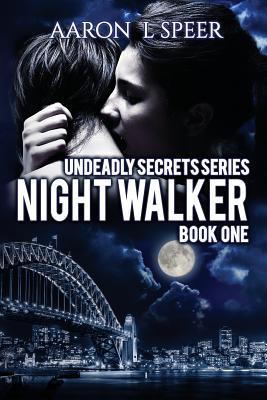 A young woman named Alexandra "Alex" Hensley discovers Sydney is hiding a very dark secret, a revelation that will challenge all she knows and endanger all she loves.
Sinister forces, charged with keeping the secret for over two hundred years discover her knowledge and set out to fulfill their duty.
The truth will not set you free.

(From Goodreads)
I've been writing since I was around 11, and have rarely been seen without staring off into the distance or with a pen in my hand ever since.

Whatever my genre I happen to be writing at the time, I am passionate about bringing this beautiful country I live in, Australia, to light. (Hint hint...even if that includes epic fantasy and vampires).

Just when I thought I had read every good book about vampires Night Walker comes in and proves me wrong. If you are looking for a fast passing, ingenious, smart, funny and well written book this one is a great choice. And if you are a vampire lover like me, trust me! you have to read this one.

Alex is a young woman whose life is turned upside down when she finds out that night creatures are real. She is a likeable character, quite real and brave on her way. When the story is at its highest peak she takes the reins of the story and does a good job at it. Dante is the typical tormented vampire. He tries to make out the best of his situation and obviously he doesn't want to live like majority does and creates his own rules.

The other characters are all well described, the bad guys are evil to the core, the good guys fight with all their power but I have to mention Lauren, the BFF, she is a crazy b**** (if you know what I mean). She is one of those people whose personality comes like a tornado and drags you into her craziness. I really liked her and was one of my favorites (even at her darkest moments).

There are a lot of elements that make this book worth your time. For example the writing style, it's fresh, natural and modern. It feels like if you were talking to a friend. Of course this friend happens to live in a world where vampires are real. The dialogues are natural and believable, I never doubt I was reading about people around their twenty-something. It's clear that the author used his knowledge of the city, the surroundings, the local history and how young people have fun (I almost believe that this wasn't fiction, of course it is or I would be buying a plane ticket to Australia).

Another thing that got me reading was the action, there are numerous scenes where adrenaline jumps in and it's palpable through the words and you can sense the tension and the danger. There are old enemies, secrets unraveled, the past coming to change the present. You also get great doses of blood, death and intrigue.

This book brings back the classical vampires, the ones that sleep during the day, don't spark and are real kick-ass bloodsuckers. The author explains everything with simple words and you get an answer for everything. Despite using classical elements the book also adds original facts and ideas (which I won't tell because I don't want to ruin the surprise).

I really liked, well more like I LOVED, that this wasn't the typical vampire book where the main lady falls for the bad guy who ends up being a blood-sucker. I mean, she feels attracted to Dante but I think is only because he is really handsome and a good person. Also, as you know the vampires have in their nature a way to lure everyone, it's their way of survival. I think it was really clever to create a story that doesn't revolves around a silly love story.

Last, I would like to mention the cover. It's beautiful and it really captures the story with images.