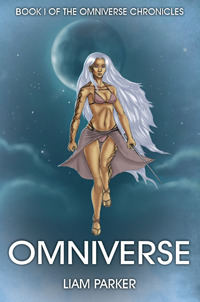 
What if you were haunted by strange and terrible dreams in the night? But what if they were not dreams, but preludes of the truth? What if you met the woman of your dreams in a nightmare? What if you learned that you were doomed to a terrible destiny, and that there was nothing that you could do to escape it?
This is the fate that befalls Jack Thornton, a former Marine lieutenant who served with the famed "Walking Dead" in Vietnam and who is now a lawyer in San Francisco. His quiet, ordered life begins to unravel, however, when his nightmares begin to shape his waking hours. The grim images that haunt Jack's sleep are not of Vietnam, but of things and beings not of this earth. Foremost among them is an adversary older than time and evil beyond imagining: the Yarvaak Golu, The-God-Who-Waits.
Jack comes to realize that he is something far more than human. He is a Hero, an undying servant of the Absolute, doomed to an endless cycle of violent death and rebirth. Jack Thornton finally accepts not only what he is, but that his very soul and our world are in more than merely mortal danger. Jack's journey of discovery leads him down a dangerous and uncharted path to a deadly meeting with his eternal enemy, Heinrich Kuhl; who, like Jack, is also more than merely human. Kuhl is a Servant of Death: a willing pawn of far greater and vastly more malevolent entities than himself. But Jack Thornton will find friends as well as enemies.
He will meet the hauntingly beautiful Aiyanna, whom he encounters in a terrifying dream; and Brighid, the fiery red-haired goddess who loved him in a far-off time and place where he bore a storied name. He will also meet Sean Plunkett, once a feared IRA gunman and soldier of fortune, and now his guide on the Way of the Hero.
This then, is the beginning of Jack Thornton's tale, the first book of The Omniverse Chronicles.

Liam Parker has been a busboy, a bank messenger, a bartender, an editor, a history teacher, a trial lawyer, and a United States Marine. A lifelong martial artist, he holds the rank of 4th Degree Black Belt in Okinawa Shorin-Ryu Karate. He lives in the Pacific Northwest, where he is currently at work on the sequel to Omniverse.

First of all I have to say that after three failed attemps of reading this book, I made one of my goals for 2015 to finish this book. This last time after reading the first chapter I couldn't put the book down. I don't know what went wrong the other times but I'm so glad I read this book.

Jack Thornton has been having strange dreams, nightmares that leave him with a feeling of unease. When he starts to look answers he discovers that the threat is real but not from this world.

A really complex character, Jack is a strong and powerful man. He is an ex Marine and now works as a lawyer. Having fought in Vietnam he is haunted by the past and sometimes daily life seems a burden.

Once the bad guys make an apparition, things go out of control. There is a lot of action, bullets, blood and danger. Despite having more than 400 pages the book moves quite fast.

I really liked that the book was set in 1973, the scars of the war are still fresh. The protagonists are still alive (or at least those who survived). They have to live with the horrors repeating in their minds. It creates an interesting scenario for the story.

I feel like the explanation of the bigger picture, the whole Omniverse concept and all takes a long to take place. Let me be clear the plot is solid and it's well built. However, Jack takes too long to discover all even his true identity.

The book has a lot of secondary characters. They are a group of people from all over the world, which is totally smart given that there are bigger forces that move the strings of the universe. My favorite was the Irish guy, he is a real kick-ass.

Overall, I really enjoyed the book. The cover is really beautiful (the main reason why I picked up the book).