The Seventh Cup by @nitsgoa - Review 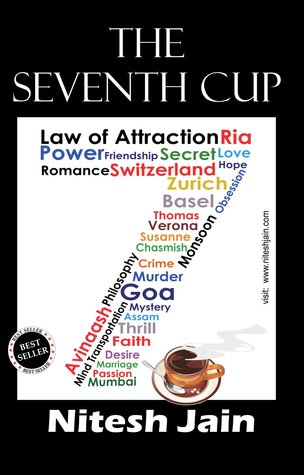 The Seventh Cup by Nitesh Kumar Jain is a well-crafted mystery novel that contains just enough elements of a Shakesperean tragedy to make the reader sympathetic to the sociopathic protagonist, Avinash, a drama student from Goa, India.
Enter Verona Schmidt, an unsuspecting Swiss exchange student, to upstage everyone in the college Dramatics Club and to become front and center in Avinash s peculiar frame of mind. Over coffee at the local Nescafe, Avinash introduces Verona to the concept of mind transportation, which she perceives as nothing more than a fun game she is playing with a young man who seems to be flirting with her. The exchange student enjoys Avinash s company and co-stars with him in his play put on by the Dramatics Club of their college. She eventually allows herself (despite her claim to having a so-called boyfriend named Kevin) to enjoy champaign and a kiss with Avinash. Dismissing the romantic moment as a drunken mistake, Veronafleesback to Switzerland with the obsessed Avinash in hot pursuit across the globe.

Nitesh Kumar Jain (1987) spent his childhood days in the beautiful state of Assam in India and pursued his schooling at Carmel School, Jorhat.
Later he went to BITS Pilani, KK Birla Goa Campus. He graduated as a Chemical Engineer in the year 2010 and worked as a trainee at Aditya Birla Chemicals inThailand for six months. He did his post-graduate work in Chemical and Bioengineering from ETH Zurich, Switzerland, and later worked as an intern at BASF AG, Basel.
During his two-year stay in Switzerland, he conceptualized his debut novel, The Seventh Cup. Currently he is in India working on a start up venture. Apart from writing he loves photography and travelling to new countries to explore different cultures. Nitesh has visited several countries during the past few years such as Thailand, Switzerland, Italy, Germany,France, Austria,The Netherlands. He wish to visit Turkey, Australia and the Nordic countries in the coming years.
He believes in the saying by Paulo Coelho: When you want something, all the universe conspires in helping you to achieve it!!!

The Seventh Cup is well thought mystery that presents the clever idea of mind transportation. This is a story that mixes romance, drama, amazing scenarios and surprising characters.

It all starts with Avinash and Verona. At first they seem mere strangers meeting in a café. Somehow, he introduces her to the idea of mind transportation. And then, reality and fantasy start to mix. While we try to figure out what happened with Verona we discovered some unsettling trues.

Alternating between different characters and different moments in time the author creates a story that is really intricate and turbid. For moments it seems that the characters have little in common but once the story starts to move on we understand why each person is where it is and the role each one have in the book.

Each page brings a new revelation and some of them are shocking. The writing drags you into a world where is hard to separate what is supposed to be real and what not.

The writing is really good. There were dialogues that seem a bit unreal for me but I understand the tragic tone the author wanted to use. Overall, the descriptions have a lot of details and it’s easy to imagine the places and scenes.

Overall, if you are looking a mystery with a really good and unexpected but believable outcome you should read this book.

Important: I would recommend you not to read the blurb or forget about it while you read it because it has some spoilers.