Review: The Appeal of Evil by @PembrokeSinclai 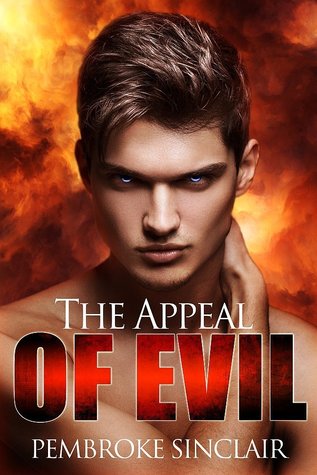 Katie wants to invest her heart and soul in love, but she may lose both to Hell.
Katie, a senior in high school, is torn between loving the "good" guy, her childhood friend Wes who makes promises he doesn't keep and abandons her when she needs him the most, and the "bad" guy, the new kid at school Josh who is also a real demon from Hell. Katie wants someone who pays attention to her and puts her first, but what is she willing to give up to find him?

Pembroke Sinclair is a literary jack of all trades, playing her hand at multiple genres. She has written an eclectic mix of fiction ranging from horror to sci-fi and even some westerns. Born in Rock Springs, Wyoming--the home of 56 nationalities--it is no wonder Pembroke ended up so creatively diverse. Her fascination with the notions of good and evil, demons and angels, and how the lines blur have inspired her writing.

Pembroke lives in Laramie, Wyoming, with her husband, two spirited boys, a black lab named Ryder, and a rescue kitty named Alia, who happens to be the sweetest, most adorable kitty in the world! She cannot say no to dessert, orange soda, or cinnamon. She loves rats and tatts and rock and roll and wants to be an alien queen when she grows up.
You can learn more about Pembroke Sinclair by visiting her at:

The war between good and evil is endless and you can find thousands of stories about it. However, when Katie finds herself divided between the two sides an original argument comes to surface.

Katie and Wes have been friends since they were kids and she has always loved him. Despite suffering multiple times because it seems Wes doesn’t love her too, she still tries to be his friend. But when Josh enters the picture, things get a bit dangerous.

Katie is a character difficult to define. She seems so naïve at times but also strong and decided so it is hard to say if I like her or not. I enjoyed the fact that she doesn't go for the logical choice she is not the typical "good and nice" heroine. It’s like she had a twisted sense of good and bad.

The love triangle is entertaining. However, for moments the intensity gets lost because she is so focused in only one guy and the other is just a distraction. Maybe in the next book we can see more tension and drama.

The writing is good, the action scenes are easy to follow and the dialogues are natural and believable. I like the internal conversations Katie has in her mind, this are typical teenager behavior and for me are so real. Kids that age spend endless hours figuring out what to do and why.

Another element I enjoyed is how soon in the book Josh identity is revealed. I was reading and asking: “and now what???” luckily the author had it all planned and the action continued.

This is the first of a series so you can imagine some lose ends and questions left unanswered.

If you like YA paranormal with teenager drama and love triangles you should give this book a look.

Email ThisBlogThis!Share to TwitterShare to FacebookShare to Pinterest
Etiquetas: 4 stars, paranormal-romance, Review, YA