Souls of Astraeus by @JeramyGlobe - REVIEW 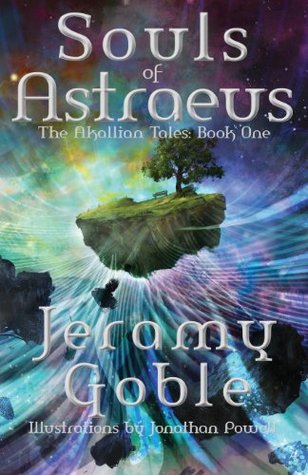 Death was a bummer. Well, not for Akal. A death on Earth only meant a birth into the multiverse. It did for him, anyway. Just when he thought he was checking out and taking his last breath, he was standing... on an island. In space. With a pretty tree and bench on it. There was a little breeze, too. But, where was it coming from?
Countless star systems, galaxies and universes stood before Akal but their numbers couldn't rival the amount of questions he had. He knew all the answers were out there somewhere, but they wouldn't do him any good if he didn't know where to start. Slowly but surely, through tribulations across a myriad of experiences, Akal starts to piece together what had happened to him, as well as his wife. His one true love across all of existence.
Before long, Akal was dodging gunfire from the United States Army in 1877, sailing and fighting in space millennia later, and dodging the razor-sharp wings of assassins high in the skies of Kestrellia. The quests seemed unending but were absolutely necessary in the name of getting information. He dared someone to stop him. As insignificant as any single creature may be within the context of the multiverse, Akal eventually discovers how that margin can be narrowed by a single act.
How he and others like him live their lives may show us how to more thoroughly live our one. Souls of Astraeus is a distinct and engaging science fiction and fantasy adventure that redefines the role of the hero and the hero's motives, without cynicism or naivete. Souls of Astraeus shows us that knowledge and love can be attained by everyone without having to sell their souls.

Souls of Astraeus is a science fiction charged with excitement, solid explanations, great characters and awesome illustrations. Even if you are not a sci-fi fan you will enjoy a good story about who we are and the immensity that surrounds us.

Akal discovers that his soul is really ancient and has gone from life to life, from form to form, from planet to planet. And he is one of the lucky ones to get the chance to be called an Astraean. The Astraens have the chance to obtain knowledge from all their previous lives and can visit all their previous forms, planets or galaxies. Once you start to read about I’m sure you will be overwhelmed and feel very small. It's almost impossible to imagine this vast universe with so many possibilities.

I think that Souls of Astraeus is about some fundamental topics as humanity, love and friendship. Akal goes through a process of learning and healing while discovering that chaos and corruption are part of the universe. And whether we like it or not, there always will be people against the greater good.

The story is told from Akal’s point of view. In this case I think it was important to read the story directly from someone who was living this incredible, humbling and extraordinary experience. However, there was a moment where I found disturbing that he described everything through human feelings. Let me explain… he has lived in the form of more creatures and beings that you can imagine but is like all of them have human minds. But here is the good part: the author smartly explains that Akal sees all with human eyes (and with a human mind) because his last life was in human form. Clever, don’t you think? I hate when author describe aliens forms of life that act like humans, in this case the explanation makes sense.

The author creates a vivid, colorful, sensorial world. His words really transport you to a new universe where you can picture everything as real. Of course the illustrations help a lot because they put in images the author’s words. So, the writing is really good, the descriptions are easy to follow but complete and the characters are likeable.

Overall, if you are a sci-fi reader you should read it. If you look for a profound and honest book you also should give it a go. I look forward to read book two.
Publicado por RuthB en 9:00 AM