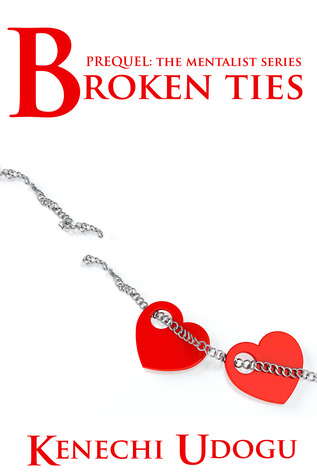 "There was nothing unusual about the night everything changed. No flashing lights in the sky, no searing fire in my belly; no sign whatsoever to suggest the shift which was to come...Nora Brice did strange things to me. Strange and awful things..."
Paul Colt has a problem, and it is not one most teenage boys face. Yes, he likes a girl; one he’s pretty certain he’ll do foolish things for, given the chance. But he can’t go after her, or any other girl for that matter. That’s what he gets for being an Averter; forced to toe the line for the propagation of the collective. He knows some rules are okay to trifle with, and there are some which should never be broken. The gravest of them all?
Don’t fall in love.
Ever.
This is the story of how Paul breaks that rule.
This prequel novella to the Mentalist Series can be read before or after Aversion, Book One of The Mentalist Series, but will be differently appreciated if read after.

Broken Ties is the perfect prequel for a great series like The Mentalist. Having read the two books in the series I approached this book with some expectations and ideas. However, I’m glad to say that I was surprised by some of the revelations and how good the characters are. This book has all the elements of a paranormal YA story but that doesn’t make it any less interesting.

Paul, Gemma’s father, is only 16 and we find him at his rebel teenager stage. He is questioning the rules of the Averters, especially after meeting Nora. Young love can be so strong and it always hits you real hard. This time is no exception; we witness a sweet, intense and pure love.

The story moves really fast and the excitement is always palpable. The dialogues are good, there are some funny situations and the characters are well described. You can see each one as a unique individual with a defined personality.

I have to mention that this installment focuses more in the romance than in the paranormal element. Of course the Averters and their abilities are present but compared to the other books, here the most important thing is the story between the two teenagers.

If you have read the other books you sort of know what is going to happen at the end but the author makes a good choice and wraps it up in a perfect place. A round of applauses for the finale.

Overall, a great YA story with a paranormal element. It’s a must for those who had read any of the books in The Mentalist series. If you haven’t, it’s a great way to become acquaintances with the series and the author.
Publicado por RuthB en 9:00 AM

Email ThisBlogThis!Share to TwitterShare to FacebookShare to Pinterest
Etiquetas: 5 stars, Kenechi, paranormal-romance, Review, The Mentalist, YA