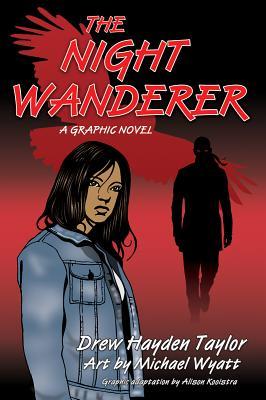 Newcomers to the Otter Lake native reserve don't go unnoticed for long. So it's no surprise that 16-year-old Tiffany's curiosity is piqued when her father rents out her room to a complete stranger.
But little do Tiffany, her father, or even her insightful Granny Ruth suspect the truth about their guest. The mysterious Pierre L'Errant has a dreadful secret. After centuries roaming Europe as a brooding vampire, he has returned home to reclaim his Native roots before facing the rising sun and certain death. Meanwhile, Tiffany is deeply troubled -- she doubts her boyfriend is being faithful, has escalating disputes with her father, and her estranged mother is starting a new life with somebody else.
Fed up and heartsick, Tiffany threatens drastic measures and flees into the bush. There, in the midnight woods, a chilling encounter with L'Errant changes everything as Pierre introduces Tiffany to her proud Native heritage. For Pierre, though, destiny is fixed at sunrise.
In this stunning graphic version of the award-winning novel, artist Mike Wyatt brings a brilliant story to visual life.

The Night Wanderer is a fast, well-illustrated and solid graphic novel. It has good characters, great dialogues and a plot that is easy to follow.

Basically, the book is about Pierre L'Errant returning to Otter Lake, a native reserve, looking for redemption. There is a story going on the background that provides Pierre with the opportunity of having a good last action. It's very simple to understand; an anguished teenager having problems with her father, a boy and an absent mum.

It’s a paranormal story where vampires are real. However, for me the paranormal aspect was not that relevant or wasn’t adequately exploded. It’s always present and you know he is a paranormal being but I would have like to see more scenes of him being as a vampire.

There were things I really enjoyed for example the illustrations, which were amazing. They were my favorite part. The choice of colors seems appropriate to create a really good atmosphere. The gray scale presents an environment where tension and suspense are always present.

It’s a short book so you get to the climax very quickly, the action comes really soon but I it leaves you waiting for something more.

Overall, it is a good graphic novel and I’m sure it looks really good in paperback or hardcover version.
Publicado por RuthB en 9:00 AM