HAPPY BIRTHDAY TO ME :)
Yes! it's my birthday and finally I'm updating my blog. I've read a lot this pass days so you can expect a lot of reviews and more.
Have a great day :) 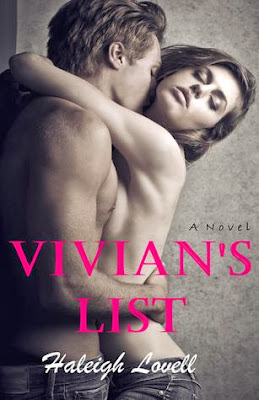 
Vivian Sorenson is in a verbally abusive relationship. When her boyfriend, Brody, calls her "frigid" and "boring ol' vanilla," Vivian finally ends the toxic relationship and embarks on a journey of sexual self-discovery.


Liam Sykes has known Vivian all his life. She's his best friend's little sister and she's always been off-limits. When he happens upon Vivian's sexual bucket list, he crosses that forbidden line. Soon it becomes more than just sex as Liam picks up every jagged little shard of Vivian's shattered heart and pieces it back together, replacing it with a piece of his own.

Genre: New Adult Contemporary Romance (Recommended for 18+ due to language and sexual content)

Vivian has been in a verbally abusive relationship and as many women in her situation she is in denial. When she finally decides to get away from an awful boyfriend, her brother’s best friend will be the knight in shiny armor she needed.

Vivian is not one of my favorite characters. She starts being this shattered woman who has lived through some hard moments in her life and has lost herself in a non-healthy relationship. At first she is well portrayed and is easy to imagine why she acts or thinks certain way but she moves on too fast. I find it hard to believe that a woman who has been years in an abusive relationship can react that fast and leave the man who has hurt her without a second thought. It makes good to the story because it set in motion a series of events that are good to read but her character doesn’t seem real or likeable.

Liam is supposed to be the perfect man, sweet, strong, sexy, a war hero. The author creates a partner who has both great personality and great bed skills. Thanks to him, the story has a high sexual content which is well written without being too trashy or obvious.

The book has a dual POV and I like it. It makes the story more dynamic and interesting to read. Liam has an expressive and deep voice and Vivian is sad and a bit pessimist at first but more jovial and mature at the end.

Overall, this is a good new adult reading with high doses of hot romance. I would like to read the second book just to see how their story unravels.

*** I received an ecopy from the author in exchange of an honest review. ***
Publicado por RuthB en 10:47 AM