Thy Will Be Done - Review

Welcome back :) A new week has began and it's time for a new review.
I received a paperback copy from the author and I'm glad to say that I really enjoy the book.
THY WILL BE DONE
by Julie Fisher. 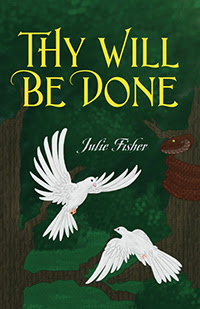 Ever since childhood, Luke’s nights have been plagued by nightmares centered around a beautiful woman and a malevolent monster. Despite the sleeplessness and debilitating dreams, Luke’s life has been fairly normal—that is, until he learns that this beautiful woman is real.
Even more bizarre? This woman has been dreaming about him as well. Suddenly Luke finds his world spiraling into an unknown realm when he discovers the profound link he has with this woman.
Powerful forces have placed them in the center of a timeless battle between good and evil, and Luke finds himself facing enemies and friends who conspire to keep him from the truth—a truth that may end up costing him the woman he loves…and maybe even his life. If the woman of his dreams has turned out to be real, could the monster be real too?
Thy Will Be Done is a refreshingly modern take on the age-old conflict between light and dark. With its memorable characters and whirlwind of a plot, this book promises to be an unforgettable experience.

FIND OUT MORE ABOUT THE AUTHOR:  GOODREADS | AMAZON|

Thy Will Be Done is a paranormal romance with a biblical touch. Luke has been dreaming about the same girl since he was five and all his life he has been comparing the women he dates with her dream girl. But she is not the only one living in his dreams, an awful and terrifying monster has given him nightmares through most nights. Once he discovers the girl is real and has been dreaming about him, their lives will give a turn to an unbelievable world.

As I started reading I was also wondering where Luke was because the first eleven chapters have Nicholas and Ellen as main characters. They are very sweet characters living more than hundred years before our time. This first scenario is really sweet, with the right atmosphere for the era, with lovely dialogues and real feelings.

The minute Luke and present time made their appearance everything got better. Once we get to present time we encounter a fast story, with great dialogues and engaging action. The characters have pretty defined personalities. Luke is really messed up and his life is chaotic but we get to know different sides of him as the story moves on. Abigail is another story, we read a couple times from her point of view but Luke seems to be the key role to the story.

This book is beautifully written and you can sense the author's devotion to the story and the passion with which she wrote it.

Mainly this could be described as the story of two souls who have loved each other since forever. However, is a story about the choices we made and the consequences they have. It’s also a book about forgiveness, about redemption, about humanity and all that makes us who we are.

There are a few moments and situations that are a bit predictable as well as the true identity of some characters. If you are a careful reader you’ll know what I talk about.

Overall, this is a great paranormal romance. Engaging, fast and recommendable for those who like romance with a biblical touch.
Publicado por RuthB en 11:23 AM