This is the book 2 of the Interchron series.
I really liked book 1 and I'm about to read the sequel. You can read my review for book 1: HERE. 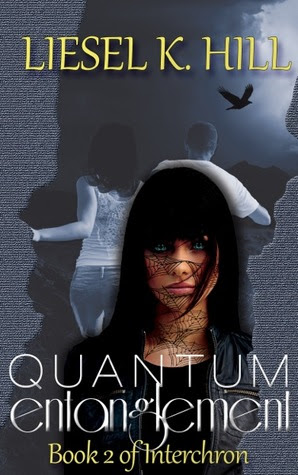 Five months after traveling to a post-apocalyptic future where collectives reign supreme and individuals have been hunted to the verge of extinction, Maggie Harper was returned to her own time until the threat to her life could be neutralized. She thought Marcus and the others would return for her within a few weeks, and now she’s beginning to worry.
When travelers from the future finally show up to collect her, it’s not who she expected. With the return of her memories, she wants more than ever to see Marcus again, but a snake-like woman whose abilities are a perfect match for Maggie’s, an injured Traveler, and decades of civil unrest to wade through all stand in the way of their reunion.
Meanwhile, Marcus and Karl traipse through the countryside, trying to neutralize Colin, who’s promised to brutalize and murder Maggie if he can get his hands on her. When a collective woman is left for dead, Marcus heals her, hoping she’ll be the key to killing Colin and bringing Maggie back. But she may prove as much a hindrance as a help.
The team struggles to get their bearings, but things happen faster than they know. The collectives are coalescing, power is shifting, and the one called B is putting sinister plans into action. If the team can’t reunite and get a handle on the situation, their freedom and individuality—perhaps their very identity—will be ripped away before they can catch their breath.


Hello Wonderful Readers! Thanks for having me here and special thanks to Ruty for hosting me today. In my newest novel, Quantum Entanglement, Book 2 of Interchron, everyone’s favorite time Traveler, Karl, is faced with a difficult task. He has to babysit a collectivist woman and endeavors to convince her of the evils of collective living, trying to turn her to the individualist side of the Force.

It’s not as easy as it sounds. To find out how Karl did, you’ll have to check out Quantum Entanglement. But, it occurs to me that some of my readers may have been faced with this exact dilemma sometime in the past, or may be faced with it in the future. (Most of us are actively making plans to survive the dystopian apocalypse, right?) So, I thought I’d share some tips on how to convince collectivists to join us in the sunlight of individualism.

1. Get them to trust you. This will require some outside-the-box thinking on your part. Collectivists are always VERY suspicious of individuals, especially right after they emerge from the collective. Karl’s solution was to give the collectivist a rock and tell her that if she felt threatened, she could throw it at him. Unfortunately for Karl, she took him up on the offer. I wouldn’t recommend this technique unless you’re certain you can keep the collectivist from victimizing you. You’ll probably have to read their body language and over-analyze what they say to determine what their fears are and put them at rest. So, it’s simple, really. Just become a psychiatrist in your own right and you’ll breeze right through this step.

2. Explain to them logically why individualism is just better than collectivism. This is something you’ll want to put together beforehand and practice. Collectivists will know their stuff and you don’t want to debate with them until you know yours. Otherwise, you might find yourself considering collective life yourself. Warning: this step can be VERY frustrating. Chances are, words alone won’t convince them of anything. But this step is necessary to build a groundwork in their minds so that when you show them a real world example, (see step 3) they have a frame of reference for it. Make sure to prepare yourself for the sensation of arguing with a pencil sharpener.

3. Real World Experience. After drilling the arguments into your collectivist’s head, they’re going to need to see individualism in action. This will need to be a profoundly emotional experience for it to work. Show them a family being loving to one another, a parent shedding a tear at the accomplishments of a child, the devotion in a romantic relationship. Something that will showcase the emotions of individualism. Note: A tragedy will work best to drive the emotional point home. No, don’t put friends and family through tragedy just to prove a point. This is where books or films will work in your favor. Notebook ‘em. Or make them sit through the end of Titanic. Whatever it takes to show them that our emotions are what make us human, and are the most beautiful part of being an individual. And that us hardcore individualists wouldn’t give up the passion we feel for all the safety the collectivists can offer.

Go through these three steps with your collectivist. Repeat if necessary. If you still don’t find success, you may be dealing with a collectivist that will just have to make the decision independent of you. But even then, don’t despair. According to the concept of quantum entanglement, all things that have an impact on one another will continue to impact each other for all time. You will have changed your collectivist simply by showing them their own humanity. Even if it takes years, they will return to it in some form.

And you will have succeeded.
Publicado por RuthB en 9:50 AM