Today I welcome author Jamie Baywood and her book "Getting Rooted in New Zealand".  She was kind enough to provide an interview and also has offered an ecopy of her book to a lucky winner. Keep reading and find out more :) 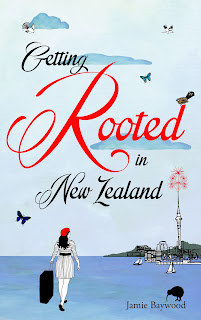 Craving change and lacking logic, at 26, Jamie, a cute and quirky Californian, impulsively moves to New Zealand to avoid dating after reading that the country's population has 100,000 fewer men. In her journal, she captures a hysterically honest look at herself, her past and her new wonderfully weird world filled with curious characters and slapstick situations in unbelievably bizarre jobs. It takes a zany jaunt to the end of the Earth and a serendipitous meeting with a fellow traveler before Jamie learns what it really means to get rooted.
*****
About the author Jamie Baywood:
Jamie Baywood grew up in Petaluma, California. In 2010, she made the most impulsive decision of her life by moving to New Zealand. Getting Rooted in New Zealand is her first book about her experiences living there. Jamie is now married and living happily ever after in the United Kingdom. She is working on her second book.
The Interview...

First let me tell you that I love the idea of travelling impulsively somewhere far away from home.  Let’s start from the beginning…

Ruty: Why did you decide to leave your home?
Jamie: Growing up in California, it was always my dream to live abroad. By the age of twenty-six, I was actually much happier being alone than dating, but I was completely bombarded by guys trying to date me.

Ruty: Why New Zealand?
Jamie: I read in a New Zealand tour book that the country’s population has 100,000 fewer men than women.  I wanted to have some me time and an adventure. New Zealand seemed like a good place to do so. I found a work abroad company that helped young Americans get work visas in New Zealand and Australia. Within a couple of weeks of making the decision to go to New Zealand I was on a plane.

Ruty: How long were you there?
Jamie: I lived and worked in Auckland, New Zealand for over a year. It wasn’t a holiday; I set up a life for myself. I worked Monday through Friday, paid bills, went grocery shopping, joined a gym, etc . I also made an art collective with a group of friends and performed a monologue in a play for Thomas Sainsbury.

Ruty: Did you know from the start that you were going to write about your journey?
Jamie: I consider myself an accidental author. I didn’t go to New Zealand with the intentions of writing a book about my experiences there. I had funny experiences that I had trouble believing were true. I wrote the stories down to stay sane. I wrote situations down that were happening around me and shared them with friends. The stories made people laugh so I decided to organize the stories into a book and publish in the hopes to make others laugh too.

Ruty: Were you keeping a diary of your time there?
Jamie: I didn’t start keeping a diary or writing until I moved to New Zealand. I wrote to keep in touch with friends and family.  I saved the emails that eventually became my book.

I was very lucky in New Zealand to meet a lot of talented people. I had the opportunity to write and perform for Thomas Sainsbury the most prolific playwright in New Zealand. I performed a monologue about my jobs in the Basement Theatre in Auckland.
The funny thing about that experience was Tom kept me separated from the other performers until it was time to perform. I was under the impression that all the performers were foreigners giving their experiences in New Zealand.  All of the other performers were professional actors telling stories that weren’t their own. At first I was mortified, but the audience seemed to enjoy my “performance,” laughing their way through my monologue.
After the shows we would go out and mingle with the audience. People would ask me how long I had been acting. I would tell them, “I wasn’t acting; I have to go to work tomorrow and sit next to the girl wearing her dead dog’s collar.” No one believed I was telling the truth.

Ruty: How do you feel about sharing your experience with the whole world?
Jamie:Publishing my story was one the most terrifying thing I’ve ever done. I barely slept the first half of the year worrying what people would think of my book. Publishing my book was my way of transforming poison into medicine. I hope that it can help people that have had bad dating experiences or bad work experiences – make them laugh and not give up hope.

Ruty: Were there any experiences left out? Or did you include everything despite being embarrassing or something?
Jamie:It would be impossible to write down every single thing that happened and it probably wouldn’t be interesting to read. All the stories I wrote in Getting Rooted in New Zealand are true. I had good, bad and weird experiences in both California and New Zealand and was honest about them. Some experiences were embarrassing and I included them as well. My writing was one of the things that initially attracted my husband to me when we first met. He has been very supportive and encouraging of me publishing. I tried my best to respect his privacy during the process and he vetoed a few stories about him from the book that made him blush.
I am a flawed human being and not attempting to hide it.  Although I hope that I have learned from my mistakes, I wouldn’t change anything. My experiences have turned me into a writer and I am extremely grateful for that.

Ruty: By reading some of the reviews I get the impression that yours is a funny book. I imagine that some moments weren’t that funny while you were living them, how was writing about them?
Jamie: It was really therapeutic for me to write. Rather than having the experiences swirling in my head, they were out and that freed me.

Ruty: I know you are working on a new book, can we know what it is about?
Jamie: For the past three years, I’ve been disassembling and reassembling my life by moving to different countries. I’ve lived in five countries now; America, American Samoa, New Zealand, Scotland and now England. I plan to publish another book next year about attempting to settle in Scotland.